Tigra, going by Cat eariler, is a superheroine from Marvel Comics.

She lived in Chicago around for a while until her boyfriend was gunned down by thugs making her seek revenge on those she preyed on, later on she moved back to defend the city once more and with help of the Avengers.

"The Tigra" is the historical defender/champion of the Cat People, a humanoid race created by sorcery during the Dark Ages. Concerned about the Cat People's uncontrollable population growth and savagery, a community of sorcerers eventually banished the entire original Cat People population to a demonic netherworldly realm.

The two very first Cat People, who were themselves very capable scientists and sorcerers, were able to evade banishment through their magic. They continued to live amongst humanity in secret and worked to refine the Cat People's biology to make a peaceful integration into the human population possible. However, they were constantly persecuted and required a protector. Discovering that the original spell for transforming cats into Cat People like themselves had been rendered inoperative, they created a process combining science, sorcery, and focused mental power that could transform a human female into a "Tigra," a being with abilities that far surpassed those of either race.

This unnamed first Tigra defended the Cat People with great effectiveness, and allowed a new community to establish themselves on Earth, separate from the group that had been banished. This new population continued to live amongst humanity in secrecy through the present-day, relying on enchantments that cast the illusion of a human appearance.

Nothing is known about the other Tigras who may have existed, or even if there have been more than two. At the time when Greer was transformed into a Tigra, "The Tigra" was only remembered by the Cat People as a distant but powerful legend. It has been strongly implied that only one Tigra can exist at any given time.

Dr. Tumulo was revealed to be one of these modern Cat People. When members of HYDRA tracked Tumolo down to obtain "The Final Secret" (the Black Death plague, which was another creation of the first two Cat People), Greer once again donned the Cat costume and drove them off. However, she was mortally injured by a blast from one of their alpha radiation pistols.

Greer regained consciousness in a Baja, California cave, surrounded by a gathering of Cat People summoned by Tumolo. Rapidly dying from the radiation's effects, Greer was offered one last hope of survival: a combination of ancient science, sorcery, and mental power that would transform her into Tigra, the Cat People's legendary half-human, half-cat warrior. She readily consented, began wearing only her black bikini from this time on, and arose from the ceremony as a superhuman-powered human-animal hybrid. Striped fur covered her entire body, her hands and feet bore razor-sharp claws, her teeth became long and pointed, and her eyes were now cat-eyes. In addition to superhuman strength and senses, she also gained many of the drives and instincts of a cat. Soon after, she encountered the Werewolf.

Though initially unable to change back to her human self, the Cat People ultimately gave her a mystical cat-headed amulet that allowed her to change at will. She seldom made use of it, however, preferring her feline, super powered form and mostly abandoning her life as Greer Grant-Nelson.

Greer resumed her superhero career, with most of the world unaware that the woman who briefly fought crime as The Cat was now the feline Tigra. She fought alongside most of Marvel's heavy-hitters in wide-ranging adventures. She first battled Kraven the Hunter, and then teamed with Spider-Man against Kraven. She also became a friend and associate of the Fantastic Four.

When the Avengers found themselves shorthanded, Moondragon used her mental powers to compel a dozen unaffiliated heroes (apparently selected at random) to travel to Avengers Mansion and audition for the vacant position. Though he disapproved of Moondragon's methods, Captain America offered Tigra a spot on the team.

Although Tigra's first tenure with the Avengers was brief, she served well. She also aided the X-Men against Deathbird. Her time with the Avengers was highlighted by her single-handedly saving the world from destruction by the Molecule Man, who intended to consume the planet's energy a la Galactus. Alone among the Avengers, she was able to get close enough to him to talk him out of his plan. She convinced him to seek help from a therapist and the Molecule Man has ceased to be a threat to this day.

The Avengers fought the Ghost Rider, who blasted the team with his terror-inducing hellfire. The nature of Tigra's powers caused her to be affected by the exposure on a far deeper level than her teammates. She was left with great self-doubts about her qualifications as a member of Earth's premier superhero team, particularly alongside such heavy-hitters as (Marvel) Thor (Marvel) and Iron Man. Ultimately she resigned her membership, leaving the team on good terms. 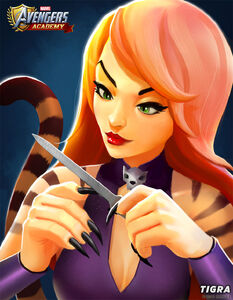 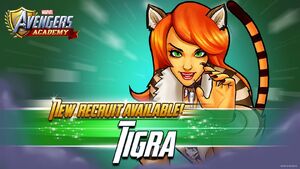 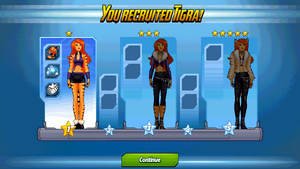 from Avengers: United They Stand