Mentor and Mistress of Aerogan

Defend the Earth and New Vestroia,

Anthropomorphic
Brute
Heroic Monster
Tigrerra is Runo's guardian Bakugan and an recurring character from Bakugan. He is one the main protagonists who appeared in the series of the show, in Mechtanium Surge, he’s Aerogan's servant.

Runo Misaki's Haos Tigrerra became a Haos Blade Tigrerra after evolving. He took on this form when he and Runo went to the Doom Dimension, in an attempt to rescue Dan Kuso and Drago. When he and Runo were forced to battle a younger version of Dan and Lars Lion, he was almost defeated. Fortunately, Runo Misaki was able to confess his feelings, which allowed Tigrerra to evolve into Blade Tigrerra. When Dan was battling everyone to help Drago evolve, Tigrerra wanted to battle Drago but was afraid that with Shun and Storm Skyress before them, he may not get his chance, so he requested that they battle first, which everyone was okay with. He lost however. He has been in multiple battles since then, mostly in order to restore Vestroia. He stayed in this form up to the point where he must return to Vestroia.

In the first episode of Bakugan: New Vestroia, Blade Tigrerra is seen as one of Baron's Bakugan battling with Mega Nemus against Viper Helios. He was defeated trying to defend Baron Leltoys Guardian Bakugan, Mega Nemus. Blade Tigrerra was later turned into a statue and stayed there for most of "New Vestroia." He was the last of the Six Fighting Bakugan who were captured. It was his capture that prompted the Legendary Soldiers of Vestroia to send Drago back to Earth to get help.

Also, at the beginning of the first episode, when the Bakugan are being turned in to balls by the Dimension Controller, you can see Blade Tigrerra in the background. Later he is freed along with the rest. Runo and Mira Fermin used Blade Tigrerra and Magma Wilda against Mylene's Macubass and Lync's Aluze after the Resistance travels back to Earth. However, Tigrerra lost defending Wilda against Macubass with the ability Hyper Velocity Fang.

Before the rest of the Brawlers tried assaulting the Alternative Weapon System after Spectra Phantom did, he and Hammer Gorem announced that, due to they're not evolving like the others, they wished to stop brawling because they considered it foolish to put their partners in danger. It is unknown where he was during Gundalian Invaders, but he is most likely alongside Runo.

Blade Tigrerra appeared for the first time since New Vestroia in Jump to Victory as Aerogan's mistress. Tigrerra wishes Runo and the other brawlers luck and to stay safe no matter what.

Because the Brawlers used the Current of Time to go back before Mechtavius Destroyer killed him, he is now most likely living peacefully on New Vestroia. 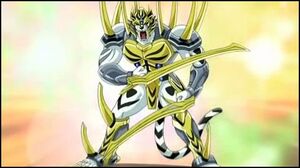 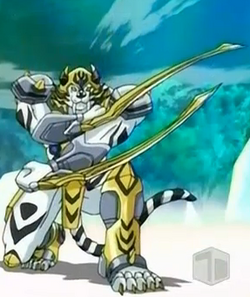 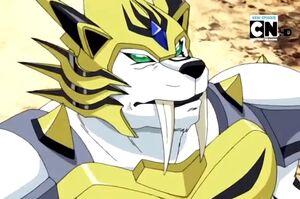 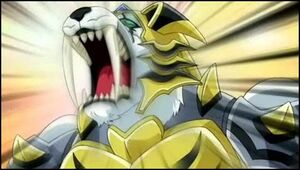 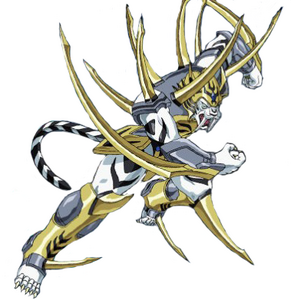