Peace and harmony among all

Save and restore the seven Chaos Emeralds.

Tikal, also known as Princess Tikal and Tikal the Echidna, is the posthumous overarching protagonist of Sonic Adventure and the "Chaos Saga" of Sonic X and its other adaptions (such as the Sonic comic books). She is a peace-loving ancient female echidna, the daughter of Chief Pachacamac and a good friend of Chaos and the Chao.

Tikal was once an orange-furred anthropomorphic echidna girl with turquoise eyes, physically 14-years old at the time of her demise. She also wore a special garment and jewelry that matches her tribe. Her dreadlocks were also wrapped with similar white bandages. In her spiritual form, she appeared either as a bright pink orb of light which hovered in the air, or as a full-bodied apparition resembling her once-physical 14-year-old self.

Because of her late paternal grandmother's teaching, Tikal is a kindhearted and gentle pacifist who is also extremely compassionate and non-discriminatory. She strongly opposes greed and conflict and wishes to see nothing more than peace, harmony and tranquility. Despite this, she does seem to have her moments of oversight. She often chooses the quickest path that will restore immediate peace, rather than what might restore harmony and be for the greater good of everyone involved. Still, her heart is in the right place and she's quick to forgive and forget.

Being a trained warrior of the Knuckles Clan, she possesses skills befitting her tribe. She is very quick on her feet, being able to outrun Knuckles and Rouge.

In Sonic Adventure she was able to appear as a ball of light, assume a ghostly form of herself, give visions to other characters, communicate to Chaos and use the power of the Master Emerald. In her 2-player cameo appearance in Sonic Adventure 2 she was shown to have the ability to climb, dig and glide.

Past and Growing Up

4,000 years ago, Tikal was born to Pachacamac and an unknown woman as an heir to the royal line of the Knuckles Clan. However, she was mostly raised by her grandmother, the chieftess of her time who was knowledgeable in the tribe's legends surrounding the Master Emerald, Chaos Emeralds and their mysterious guardian, Chaos, which all lived at a sacred altar alongside the Chao. She was taught these legends, including the sacred mantra:

"The servers are the seven chaos. Chaos is power, Power enriched by the heart. The controller is the one that unifies the chaos."

Despite not knowing what the mantra means, Tikal took it to heart and promised never to forget it. She did believe it had something to do with the Chaos Emeralds, since there are seven of them. She was also taught to be peaceful, unlike her father, Pachacamac, who would rather conquer the Knuckles Clan's neighbors to expand their borders of control, though the presence and wishes of Tikal's grandmother prevented him from doing so.

When Tikal's grandmother died, her father became chief of the clan. Under Pachacamac's command, the clan became a militaristic nation that attacked all their neighbors. Tikal attempted time and time again to convince her father to stop, but all her words fell on deaf ears.

Discovering the emeralds and meeting Chaos

While her father waged war on their neighbors, Tikal came across the sacred altar where the Master Emerald and the Chaos Emeralds resided. She then met the Chao living near the altar and became fascinated. They were initially afraid of her, but her kind heart soon won them over and they started to approach her without fear. Seeing this and sensing no evil within Tikal's heart, the water spirit that acted as shrine's guardian appeared before her from its waters. Despite the surprise, she and the spirit grew close to each other.

She came to understand that the water spirit not only protected the altar, but also the Chao, since it used to be one of them. The spirit even gave Tikal permission to approach the shrine. Upon which, she realized that the "servers" are indeed the Chaos Emeralds and that the Master Emerald was the "controller" as said in the mantra. Tikal then started visiting the shrine every so often when things at home became too much to bear.

One day, however, Tikal discovered her father's dreadful plan to seize the shrine by force and take the emeralds so that the Knuckles Clan would become invincible. She the returned to the altar to warn the spirit of her father's ambition and tells him to take itself, the Chao and the emeralds far away from the shrine so that Pachacamac would have nothing to steal, but soon learns that Chaos is unable to leave. With that said, she then attempts to persuade him to leave the holy grounds be, saying that killing and stealing cannot be the path to peace, but as always, Pachacamac refused to listen.

Fall of the Knuckles Clan

Soon, Pachacamac led his warriors to the altar to take the emeralds as planned (and somehow set it on fire), but then found Tikal standing between him and the shrine alongside the Chao. Pachacamac ordered his daughter to move aside, but Tikal bravely disobeyed. Pachacamac tried to reason that the emeralds were the Knuckles Clan's only chance of finally conquering their enemies, but Tikal rebuked this, stating that the clan's only true enemy was their own greed, and pleads with her father to end the madness. With this, Pachacamac finally snaps, boasting that he would never heed the words of a child, and orders his men to charge through the barricade, much to Tikal's horror. She and the Chao ended up wounded and tossed aside, thus incurring the water spirit's wrath.

The subsequent influx of power tore the land surround the altar from its resting place and sent it hurdling into the sky, where it became known as "Angel Island". In repentance for their sins, the remaining echidnas that had survived vowed to protect the Master Emerald to prevent it from ever falling into the wrong hands again and prevent the water spirit from ever being released. Due to its connection to the Chaos Emeralds and the havok it wreaked before being sealed, the spirit was given the name, "Chaos" and subsequently became both worshiped and feared as the "God of Destruction".

Tikal's discorporate form, a hovering pink light. The last remaining survivor of the echidna race had been sitting before the emerald alter in contemplation. In a flash Dr. Eggman, having heard of the old legend, appeared and shattered the massive gemstone, freeing Chaos its imprisonment. Unintentionally, a ball of light also shot forth from the broken shards.

This ball of light was Tikal; now an ethereal ball of spiritual energy. She journeyed the land, seeking those she felt would be the most able to heed her warning and cry for help; Chaos had returned, the world was in danger, and if not stopped the spirit would complete the task it had set out to do all those centuries ago.

Eventually Chaos stopped obeying Eggman, and upon gathering the seven emeralds once again became Perfect. Sonic and co. arrived to see Station Square be wiped out by the beast's wrath, and it was then that Tikal finally revealed her true form. She begged Sonic to return Chaos to the Master Emerald before it could destroy the world, but Sonic refused. Determined that simply patching the problem wasn't going to sooth Chaos' anger, Sonic took on his super form using the positive energy of the emeralds and proceeded to pummel Chaos into submission. Finally defeated, Tikal showed Chaos that the chao it so cared for were safe, cared for and protected by the people of earth. Pacified, Chaos finally calmed down, and vanished with Tikal. 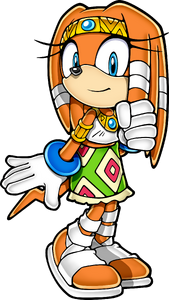 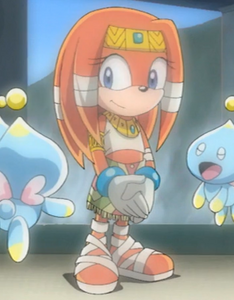 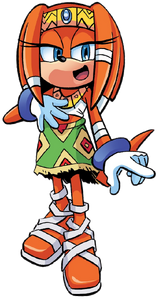 Tikhaos; a merged form of Tikal and Chaos from the Archie Sonic comics. 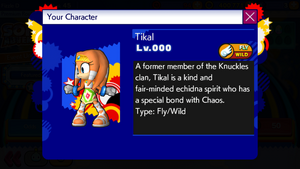 Tikal in the game Sonic Runners. 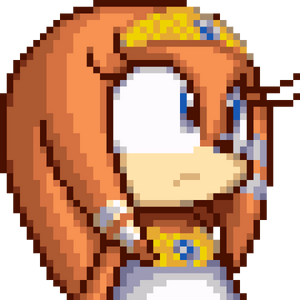