The Voice of Naga

Being with Marth, Caeda, and Bantu

Tiki is a hero from the Fire Emblem series of video games.

Tiki is an important character in the Archanea games. In her first few games, she appears as a young child with pointy ears and green hair. Despite her appearances, she is over 1000 years old. Her power is stated to be so vast, if she were to degenerate she would destroy the world. For that reason, she was put to sleep under the care of fellow Manakete Gotoh. She only woke up on rare occasions for sustenance or from nightmares. Unless the treasure of Archanea, the Fire Emblem, was completed, this was the only way to keep her sane.

2000 years later, she would grow into a very beautiful woman.

As a manakete, she has the power to temporarily transform into her Dragon state.

In English, she is voiced by Mela Lee. In Japanese, her voice depends on her age, having Ikue Ohtani as an adult and Sumire Morohoshi as a "child".

Some time after Medeus overthrew Archanea, Tiki was found by a heroic manakete named Bantu, whom she nicknamed Ban-Ban. The two explored the world together, before Medeus' henchman, Gharnef, kidnapped her. Gharnef put her under a mind control spell, but Bantu's father-like love for her saved her. Afterwards, she met Prince Marth and grew to see him as a big brother. She helped him in the final battle against Medeus, and lived with him in the palace now that the Fire Emblem was completed.

Tiki would sadly live far past her big brother. Afterwards, she moved to the neighboring continent of Valentia (later renamed Valm). She lived in the Mila Tree (the deathbed of another Divine Dragon) where she was worshiped as the voice of Naga. She continued to sleep. 2000 years after Marth's time, she was awoken by the Shepards, a militia led by Chrom, the descendant of Marth, who was seeking the gems of the Fire Emblem. She gave the one she had on hand and secluded herself to re obtain the power she lost sleeping. Afterwards, she joined the Shepards on their quest to defeat Grima.

Tiki's Artwork from Fire Emblem: Mistery of the Emblem 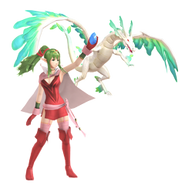 Tiki's Artwork from Super Smash Bros. Ultimate
Add a photo to this gallery

Retrieved from "https://hero.fandom.com/wiki/Tiki_(Fire_Emblem)?oldid=1957796"
Community content is available under CC-BY-SA unless otherwise noted.