Timothy Jamal "Tim" Wright(born April 22nd, 1985) is one of the main protagonists in The Magic School Bus. He is the most observant and artistic student in the class. He is not necessarily the most quiet of the students, and he can usually be found drawing something, such as Liz posing on a crater on Mercury or his Ralphie-inspired comic book The Adventures of Weatherman. He occasionally tells jokes, sometimes along with Carlos. His grandfather owns a bee farm outside of Walkerville, and as a small job he delivers the honey at the start of winter.

Tim can be seen drawing in various episodes, be it Liz on Mercury or Arnold's digestive system. In "Kicks Up a Storm," he sees his opportunity to draw a comic book, The Adventures of Weatherman.

In "Taking Flight," Tim and Wanda built a remote control plane that he designed (based on her "dreams"), and in "Ups and Downs" he hopes to get film footage of the "sea monster" in Walker Lake.

Tim and Wanda are delivering honey for Tim's grandfather in "In a Beehive," but when they crash and lose the honey, he asks Ms. Frizzle if they can go to his grandpa's bee farm. Instead, she takes them in a beehive. In "In the Rainforest," when Ms. Frizzle's cocoa tree fails to yield any cocoa beans, he and Dorothy Ann become rainforest inspectors to find out why. In "Works Out," Ms. Frizzle charges him with coaching and supporting her in the Teacherathlon while the others are in her circulatory system.

Tim is building a gift for Dorothy Ann's birthday in "Sees Stars" (a model of the Sun that plays "Wait 'Till the Sun Shines, Nellie" when wound up), but after he trips and drops it, shattering it, the class decides to get her a star. He is ready to buy one, but Keesha wants to see them, saying her grandmother bought a faulty mop from the Home Mopping Network, thus she wants to see the product first, he is a fox along with Arnold and . Phoebe in "In the City." 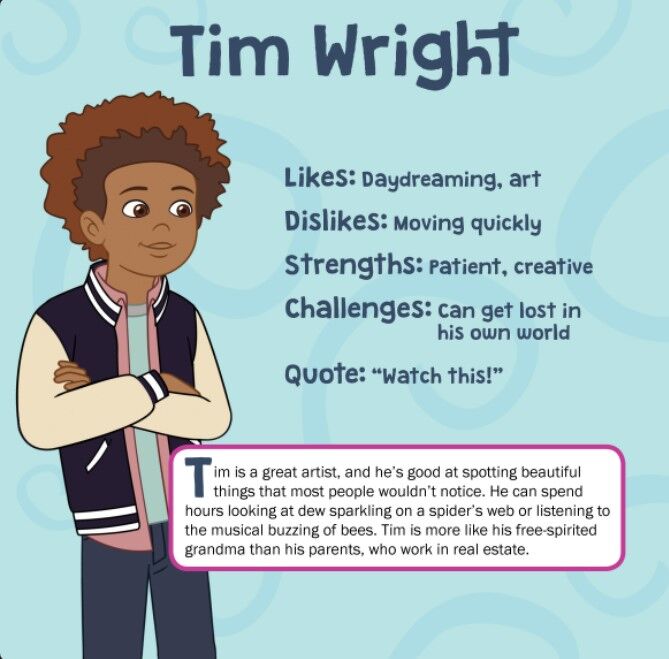 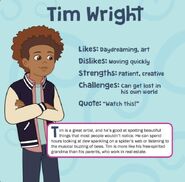 Retrieved from "https://hero.fandom.com/wiki/Tim_Wright_(The_Magic_School_Bus)?oldid=2239511"
Community content is available under CC-BY-SA unless otherwise noted.