Timmy Tantrum is one of the many heroes of the show Teen Titans and one of Raven's kids. He is the second oldest of the Tyke Titans, a team that consists of himself, Teether and Melvin, who is the leader of the team. His power is to cause sonic waves with his temper tantrums.

He was voiced by late Russi Taylor who also voiced Phantasma, Minnie Mouse, Huey, Dewey, and Louie, Webby Vanderquack, and Donald Duck as a pre-teen.

Timmy Tantrum first appeared in the episode, "Hide and Seek", where he, Melvin and Teether had to be protected by Raven from Monsieur Mallah. Timmy was the one whom Raven had the most difficulty with, due to him throwing a tantrum most of the time. He and his team mates, with the help of Bobby, managed to defeat Mallah and recieve a communicator from Raven to recieve help if they needed it. Timmy Tantrum later appeared in the episode "Titans Together", where he, Melvin, Teether and Bobby faced Mallah once again. He and his team mates are later seen helping the Titans recapture Dr. Light at the end of the episode. 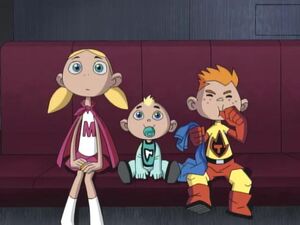