Student at Meiritsu University, Member of the Photography Club

Perverted Comic Relief, Animal Kindness
Tina Foster is a supporting character in the anime/manga series Ai Yori Aoshi. She is an American-born woman who has spent most of her life in Japan and an old friend of Kaoru Hanabishi. She attends Meiritsu University with Kaoru, and was the one who convinced him to join the photography club, of which she's also a member. Shortly after her and Kaoru's reunion, she moves into the servant house that Kaoru is staying in because she had no place to stay after returning to Japan from a year-long trip around the world.

Tina is a slender, well-endowed woman in her early 20s of average height with long, straight blonde hair. She changes her clothing notably frequently compared to other characters in the series, to the point that she's almost never seen wearing the same outfit twice.

For the most part, Tina is very carefree, cheerful and outspoken. She is also very perverted, having a habit of greeting females by groping and fondling their breasts from behind, which most people find very uncouth (and frustrates Kaoru to no end). She is a borderline alcoholic and has an enormous capacity for drinking. She is also very fond of animals and owns a white pet ferret, named Uzume, which most of the cast finds very cute, except, initially, for Miyabi.

However, Tina secretly feels that she has nowhere to belong; though more comfortable in Japan than in America, she feels completely at home in neither world, save for the friendship of Kaoru, a man she secretly (or not so secretly) fell deeply in love with, not knowing he was already betrothed to the woman she knew as their landlady, Aoi. Physically and emotionally forward, Tina will never be shy about letting those she cares about know it in no uncertain terms.

Tina is the opposite of Mayu in many ways. Where Mayu is serious, Tina is playful. Where Mayu is uncharacteristically open in her unrealistic desire for Kaoru, Tina is uncharacteristically shy in her (almost) reciprocated love of Kaoru. Where Tina is an American who embraces Japanese culture, Mayu is Japanese and embraces Western culture. When Tina accidentally bumped into her during their first meeting, Mayu reprimanded her in English, while the out-of-practice Tina struggled to recall an appropriate retort in her native language. Even their introductions to Kaoru are mirrors of one another. Kaoru did much to lift Mayu out of her loneliness, while Tina lifted Kaoru out of his own loneliness and apathy following his defection from the Hanabishi clan. 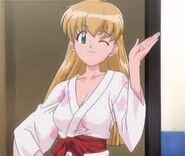 Add a photo to this gallery
Retrieved from "https://hero.fandom.com/wiki/Tina_Foster?oldid=1861180"
Community content is available under CC-BY-SA unless otherwise noted.