Tina Russo is a female duck with brown hair and pale yellow feathers. She is Daffy's beautiful girlfriend and a friend of Lola Bunny in the animated TV series The Looney Tunes Show.

She is voiced by Jennifer Esposito in the first season, and by Annie Mumolo in the second season. Her fate remains unknown after this time.

Tina's first appearance was in the episode Double Date shown working at Copy Place and when asked by Daffy on a date she says she would love to and it could be fun much to Daffy's surprise. Excited, Daffy says he'd pick her up at eight and not to use his obviously counterfeited money or she would go to jail. When they arrive, she tries to get some small talk started when Daffy starts to read what Lola claimed every woman wanted to hear. Having realized he was reading a script she takes it and says she wants to hear about him. Daffy tries to lie and say he was rich and successful. She responded knowing it wasn't true with saying let her take a shot at his true self: "You're an insecure little weirdo, who lies about everything and probably cries himself to sleep every night." Amazed she guessed all that, Daffy prepares to leave assuming she doesn't want to date him. Tina tells him to stay and compares him to a ruined building, but says if the right person was able to get their hands on it, they might be able to fix it up and said she would be willing to give it a shot. After a night of having fun, they officially start dating.

Tina's next appearance was in Bugs and Daffy Get a Job. Here, after Daffy finds out about having a small bump on his beak, he asks if she ever noticed, and she claims it was the first thing she noticed, but points out its not a big deal. Daffy refuses to keep the bump, decides to have risky surgery done to get rid of it (beyond what would of been needed) and asks her on lunch date by cell phone. There, Tina finds Daffy, whose appearance startles her and she points out that every flaw is what makes him himself. However, Daffy goes on to rudely insult her beak, and as a result, she punches him, which forced him to get his old beak back.

In That's My Baby, she forces Daffy to take care of her nephew named Zachary while she has to go to work. This leads Daffy to eventually become a surprisingly good parent, though he criticized what ever she did with the baby much to her annoyance. After Daffy saves the baby, they hold the baby together. Not long after, Daffy feels he wants to be a "mother" and start a family, only then to decide it was his life's dream to open a ice cream shop and walks off, which seemingly annoys Tina.

In the episode Beauty School, after being passed up for a promotion which she tells Daffy on their date, she asks Daffy if she should quit her job and try to become a hairdresser. Daffy responds saying he'd support her no matter what while signaling her to pay the bill. Later, she tries to do her homework of cutting the hair, but Daffy ends up doing it. Eventually she gets the promotion she wants after a coworker is fired for apparently stealing ink.

In her next appearance, The Shelf, she comes by to pick up Daffy for their date, only to notice Bugs having problems and accidentally damaging the water pipe. Daffy is upset he can't finish his shower and asks where he can stay until everything is fixed, at which point Tina offers her place, only to be rejected due to them not being married. When Daffy moved in with Porky and starts abusing him, in front of her she stands up for Porky. After that when Bugs ends up destroying his house, Tina decides to help him out by fixing it for him.

Her next significant appearance was in You've Got Hate Mail where she is first seen writing a hate filled email towards her boss, only to delete it instead of sending it to Daffy's confusion. She explains it lets off stress with no consequences and she's done plenty to him. Daffy then decides he will write one which apparently takes a few days to finish which he accidentally sends to everyone but Porky. When Bugs almost reads it, Daffy tackles him and deletes it, but chips Bugs tooth. After talking to Porky and realizing it was sent to Tina as well, Daffy fears she'll have a similar reaction or even worse then everyone else, besides Yosemite Sam who said it made him decide to change his ways. He runs to Copy Place and begs for Tina to forgive him. It turns out Tina was stuck at work all day with no breaks, so she hasn't been able to read it. When she finally does get off work, she notices that Daffy and Porky broke into her house, though Daffy assures her she's simply tired and they are going to make her dinner. After she goes to take a bath, Daffy asks her mother maiden name so he can crack the password, but tells her so he can write both her parents "Thank You" letters for bringing her into the world. Before he deletes the email he noticed a email from Michael and asks who he is. She points out it's her brother whom Daffy has apparently met. Remembering the email, Daffy seemed scared of her seeing, she reads it and mentions its long. Finally at the part on her, she reads aloud it which apparently starts off saying she's not mentally stable and a psychopath only to say she is the "most beautiful, generous, and intelligent woman in the world" while questioning why else would someone like her go out with him. This makes Tina so happy that she says she loves him. Wondering why she isn't killing him, she shrugs and says "call me crazy", only for Daffy to point out he called her a psychopath. Tina then asks where her catered dinner was in a slightly flirty way.

Melissa Duck is a character who appeared in the 1950 Looney Tunes cartoon The Scarlet Pumpernickel, and later featured on the animated television series, Baby Looney Tunes voiced by Candi Milo.

Melissa is a comedian and enjoys making her friends laugh. However, her humor sometimes gets her in trouble when she crosses the line.

This, however, is not true. Melissa actually appeared in two Looney Tunes shorts as Daffy Duck's girlfriend — namely Chuck Jones' The Scarlet Pumpernickel (1950) and Robert McKimson's Muscle Tussle (1953). She also appeared in The Duxorcist, a segment of Daffy Duck's Quackbusters. In these appearances, Melissa is an adult.

Melissa was apparently the inspiration for the Shirley the Loon character on Tiny Toon Adventures. They are similar-looking female waterfowls with a romantic interest in the Daffy Duck/Plucky Duck character.

Melissa appears in Castaras Babys, but as a young troublemaker. She interrogates Daffy into getting Lyndsey, Draco, Betty and Daphne in trouble and she then blames it on him to Maria and Granny.

Tina, as she appears in Double Date

Tina, as she appears in Year of the Duck 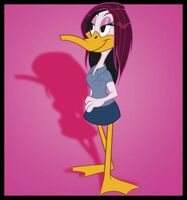 Tina as a biker 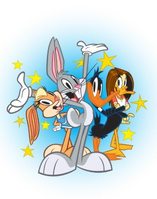 Tina with her father Frank 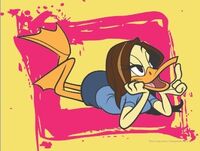