Being with Yao, Ling and Chien Po

Each other, Mulan, Shang, Yao, Ling and Chien Po

Ting-Ting, Su, and Mei are the secondary tritagonists of Mulan II. They were forced to go into marriage with bachelors from another country to establish an alliance, but instead fell in love with Yao, Ling and Chien Po.

Ting-Ting's the oldest and the tallest daughter of the Emperor, and purple is her signature color. She appears to be the smartest and the most mature of her sisters, but is carefree at heart. After Mushu's attempt to make the carriage slide down, she has her younger sisters try to escape, but her foot is caught. However, she is saved by Ling. When she hears his jokes, she thinks that they are funny but tries not to laugh, as she thinks she has an embarrassing laugh because she snorts.

She is voiced by Sandra Oh for speaking and Judy Kuhn for singing.

Mei's the middle daughter of the Emperor and is in the middle of her sisters' heights, and pink is her signature color. She's in love with Yao because she thinks that he is good-looking and gentle at heart. Mulan convinces her that her duty is to her heart and she believes that this is true. When Yao wins a wrestling fight, he chooses a stuffed panda bear and the two share it together. She is considered a slight damsel-in-distress, as she has been kidnapped by the enemies of China when the heroes are knocked down during the fight, but she is often saved by her friends. She is passionate, brave and caring.

She is voiced by Lucy Liu for speaking and Beth Blankenship for singing.

Su's the youngest and shortest daugher of the Emperor, and orange is her signature color. Her favorite thing to do is gather food from the trees. She likes to spend time with Chien-Po, who also enjoys food like her. When the carriage is damaged and the fruits float in the water, she picks them up and is saved by Chien-Po, too. She is bright, childish and cheerful.

She is voiced by Lauren Tom for speaking and Mandy Gonzalez for singing.

In the movie, the Emperor calls upon Mulan and Shang to escort his three daughters across China to be betrothed to Lord Chin's three sons so that an alliance can be formed with the kingdom of Qui Gong. The task has to be completed in three days or the proposed alliance will crumble and the Mongols will destroy China. Mulan and Shang set out with Yao, Ling, and Chien Po to safely escort the princesses.

The princesses are upset about their arranged marriages (even though they love their father very much and don't want to disappoint him), and fall in love with Yao, Ling, and Chien Po instead. They eventually go against Mulan's orders and Shang's wishes after singing about "I Wanna Be Like Other Girls". Later, due to Mushu's scheming, the three soldiers take the princesses to a village, where they impress them. Mulan soon discovers them and accepts the fact that the princesses are in love with the soldiers. Shang, however, isn't as pleased when he too finds out about them and angrily reprimands the princesses, but also harshly snaps at Yao, Ling, and Chien Po because they utterly disobeyed him.

Later, while traveling to Qui Gon, the group is attacked by bandits. Mulan and Shang are successful at saving the princesses, but Shang ends up sacrificing his life by falling into a river and is assumed dead. Mulan sadly continues her journey alone with the princesses. Since the princesses don't want to be in arranged marriages (and Shang is supposedly dead), Mulan offers herself as a bride in their stead, and Lord Qin willingly offers his eldest son, Prince Jeeki, for Mulan to marry. Thanks to interference by the mischievous Mushu, who pretends to be the "Golden Dragon of Unity," Mulan's marriage is stopped when Shang is revealed to be alive. Mushu then orders that the princesses be freed from their vows and are allowed to marry whomever they please, thus keeping the unity between the two kingdoms intact. 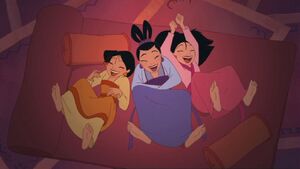 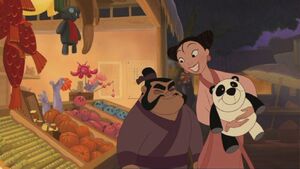 Yao and Mei falling in love 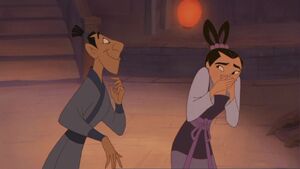 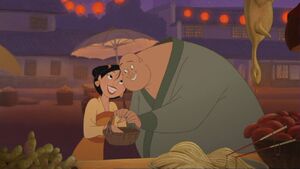 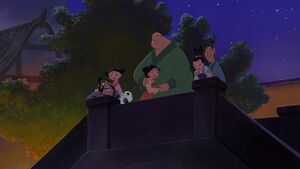 All fallen in love 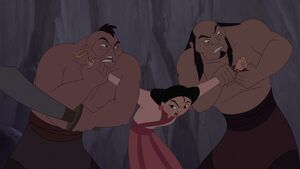 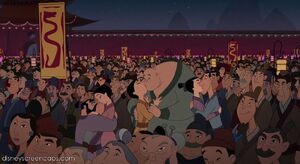 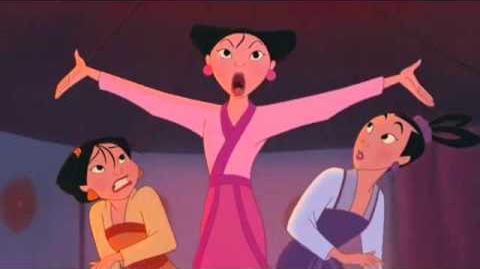