Heroes Wiki
Register
Don't have an account?
Sign In
Advertisement
in: Outdated Articles, Article stubs, The Legend of Zelda Heroes,
and 22 more

The Legend Of Zelda: Majora's Mask

Find and live with and/or become a fairy.

Tingle made his first appearance in The Legend of Zelda: Majora's Mask. He wears green tights with red trunks, and appears in various The Legend of Zelda games to help out - usually in bizarre ways. He is a talented map maker. His magic words is "Tingle, Tingle! Kooloo-Limpah!". His appearance is believed by some to be based on Koji Kondo, Nintendo's lead composer.

He is voiced by Takeharu Onishi, Hironori Miyata and Kazuyuki Kurashima.

Tingle is a pudgy middle-aged man with pale skin, dark brown hair and brown eyes. He has a pointy goatee, rosy pink cheeks, a bright orange nose and a mole on the left side of his chin. Though his appearance may confuse some, he is actually a human with a normally shaped head contrast to what his costume may portray. He has round ears, a bowl haircut and a hairy chest.

As for his attire, Tingle wears a tight green suit with a pointed hood and ears. He also wears green boots that grant Tingle immunity to fall damage, red trunks with a brown belt with a grey buckle, a necklace with a blue watch that is permanently. stuck at 4 O'clock. His suit also has a yellow cobra on the back of it, it's purpose is to scare off anybody who tries to threat Tingle.

Tingle's attire in Majora's Mask is different than his Wind Waker incarnation. He doesn't wear boots, instead his bodysuit covers his feet, and he wears a blue backpack with brown straps.

Tingle's Artwork from The Legend of Zelda: Oracles of Ages

Tingle's artwork from The Legend of Zelda: The Wind Waker HD

Tingle's section in the Hyrule Hystoria. 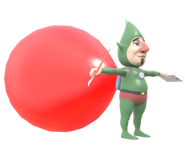 Tingle's model from Super Smash Bros. Ultimate along with his balloon.