Being friends with Melody.

Tip and Dash are Melody's two sidekicks and the tritagonists from The Little Mermaid II: Return to the Sea. Tip is a wise-cracking but good-hearted emperor penguin. Dash is a giant gentle walrus.

They are voiced by Max Casella and the late Stephen Furst respectively.

Tip, a penguin, and Dash, a walrus, are two best friends who dream of becoming heroes. The problem? They're both cowards in the face of real danger, and they tend to cause more harm than good. After saving a little girl penguin from a shark (badly), the duo got insulted by the other penguins and left. Shortly afterwards, they meet Melody, who asks them for directions to Atlantica, but Tip is wary of her. Though Dash, seeing Melody as a "damsel-in-distress", convinces him that this is their chance to really become heroes by aiding her in her quest.

They guide Melody to Atlantica and try to be discreet as they snuck into the palace to steal the trident from King Triton. They succeed and escape, but on their way back to the arctic, Tip and Dash got scared off by Undertow, but they built up the courage to enter Morgana's lair to help out Melody. Later, Morgana used the trident to make them bow to her. After being freed, Tip and Dash saved Melody from falling off an icicle. At the end of the movie, they were seen playing and swimming with everyone else. 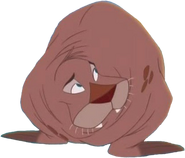