Titanosaurus is an aquatic dinosaur from Terror of Mechagodzilla. He lives in the Pacific Ocean. He is not evil because he was being controlled by both Dr. Shinzo Mafune and the Black Hole Planet 3 Aliens.

Titanosaurus was originally a peaceful, sea-dwelling dinosaur, but was discovered by Japanese marine biologist Shinzo Mafune, who was undertaking experiments involving controlling sea life. When Mafune told his colleagues that he had discovered Titanosaurus and had complete control over him, he was laughed out of the scientific community and began a fifteen year-long quest for vengeance upon the civilization that had mocked and shunned him.

Titanosaurus is first seen attacking a submarine. Later, the Black Hope aliens are able to get control of him.

Titanosaurus appears in Tokyo at night, to attack the city. However, Godzilla arrives and confronts the dinosaur until Dr. Mafune was forced to call him back after his daughter Katsura was shot.

While Titanosaurus was stomping on the ground where Godzilla was buried under, INTERPOL arrive with their completed sonic wave oscillator mounted onto a helicopter. The chopper flew overhead and began bombarding Titanosaurus with supersonic waves, placing the creature in agonizing pain. While this happens, Godzilla reemerges from the ground and begins to fight back against Mechagodzilla 2 while Titanosaurus continues to get incapacitated by the sonic wave oscillator. Godzilla eventually destroys Mechagodzilla 2 and proceeds to finish Titanosaurus as well. After getting blasted directly in the chest with Godzilla's atomic breath, Titanosaurus limps and falls over a cliff into the ocean. His fate is unknown. 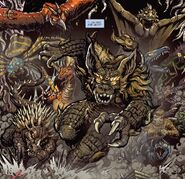 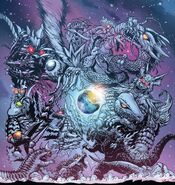