Toby
Tobes (by Jim)
Toby-Pie (by Nana)
Wingman (AAARRRGGHH!!!)
T.P. (by everyone)
Dumbzalski (by Steve)

Eating
Adventuring
Riding his Bike
Being with Friends

Help his friends when the they are in Danger

Tobias "Toby" Domzalski is one of two deuteragonists of Guillermo del Toro's Netflix original animated series, Trollhunters: Tales of Arcadia. The character will also appear in the upcoming animated tv series 3 Below, and Wizards. He is Jim Lake Jr.'s best friend and the wielder of the Warhammer.

He is voiced by Charlie Saxton.

Toby is a short, overweight boy with brown hair and green eyes. He wears a red diamond-patterned sweater vest over a yellow and orange shirt, brown pants, and white shoes. For all of the series, he wears braces.

Both of Toby's parents were killed in a storm at sea. He was sent to live with his nana in Arcadia. It was there he met Jim Lake Jr., and they've been best friends ever since. One day when they were late to school they took a shorcut through a canal where they found the remains of former Trollhunter, Kanjigar the Courageous. The amulet began to speak Jim's name, prompting the two to steal it. Toby quickly forgets about it and starts helping out Jim with his crush, Claire Nuñez. Later the next night, Toby comes over to Jim's house, where he reveals his amulet gave him a suit of armor and a sword, much to his amazement. Jim's troll friends, Blinky and AAARRRGGHH!!!, enter the house. Though this initially scares him, he quickly befriends AAARRRGGHH!!!.Blinky explains to the two that Jim has been selected as the next in a long line of heroic warriors known as Trollhunters, and that it is up to him to defeat Kanjigar's killer, Bular. Unlike Jim, Toby is looking forward to the adventure that lies ahead.

While Jim and Toby are cycling down the street, they are attacked by Bular. With Jim's amulet not working, they quickly make their way back home. While fleeing, they come across Blinky and AAARRRGGHH!!!. Unfortunately, they are unable to help due to AAARRRGGHH!!! being a pacifist and Blinky ot being a fighter. When Bular finds them, Blinky tells the group to follow him to sfety at a place he calls "Heartstone Trollmarket." As the heroes make their way to the canal, Bular and Jim come face to face. When he manages to get his amulet to work, he fends off Bular, allowing them all to escape safely to Heartstone Trollmarket. The two are taken aback by the place, a land made out of crystals and full of Trolls. 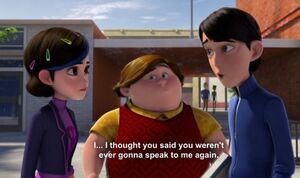 Toby with Jake and Claire. 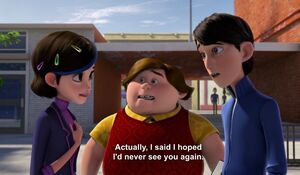 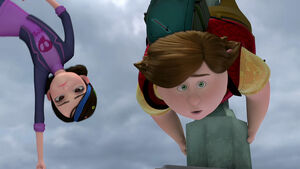 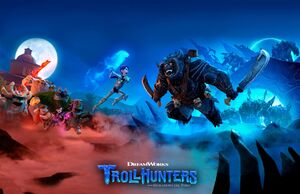 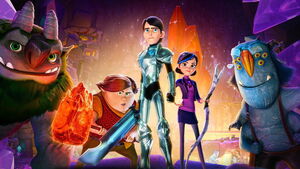 Retrieved from "https://hero.fandom.com/wiki/Toby_Domzalski?oldid=1639120"
Community content is available under CC-BY-SA unless otherwise noted.