Doing chores in the Yamaji household.

Toha Yamaji is World Ninja Jiraiya and the titular main protagonist of Sekai Ninja Sen Jiraiya. He is the 19-year-old adoptive son of Tetsuzan Yamaji who has been given the task of protecting the Yamaji's half of the clay tablet showing the location of the Secret Treasure Pako. To become Jiraiya, he wears the Jiraiya Suit and wields the deadly Optical-magnetized Light Vacuum Sword (磁光真空剣 Jikō Shinkū Ken?) to defeat evildoers. He later gains the ability to upgrade his Jiraiya Suit by equipping over it the Jiraiya Power Protector. He works several part-time jobs to support his family. Toha is actually a descendant of the alien that brought the Pako to Earth 2300 years before the start of the series. He was adopted by Tetsuzan when he was an infant after his true parents, Hanzo (半蔵 Hanzō?) and Chiyo (千代?), were killed. 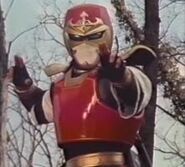 Retrieved from "https://hero.fandom.com/wiki/Toha_Yamaji?oldid=1839612"
Community content is available under CC-BY-SA unless otherwise noted.