Big T (by Jade)
Tiny
My Apprentice (by Uncle)

Member of the Dark Hand and Valmont's enforcer (formerly)

Member of J-Team and Uncle's apprentice

Help Valmont and the Dark Hand with their goals. (formerly)

Stop the Dark Hand from acquiring the 12 Talismans.
Prevent Shendu from freeing his brothers and sisters from the Netherworld.
Find the powers of the talismans before Daolon Wong.
Stop Tarakudo, his Oni generals and the Shadowkhan.
Find the demon chi before Drago.

Tohru is one of the major characters in the animated series Jackie Chan Adventures. He is initially presented as an antagonist in the 1st season, but he reforms and becomes one of the protagonists for the subsequent seasons.

He is voiced by Noah Nelson.

Tohru is a large Japanese man who joined the Dark Hand at some point. In the first season, he served as Valmont's loyal right hand enforcer, facing Jackie Chan and his family numerous times over the possession of Shendu's Talismans. As time went on and Valmont expressed his disappointment in Tohru for his failures, the large Japanese man began to have second thoughts about the whole ordeal.

After Shendu is restored back to life through his Talismans, he goes back on his promise to reward the Dark Hand for their services. Valmont orders Tohru to face Shendu despite the obviously slim chances, and Tohru nearly dies after being thrown out of Valmont's penthouse. After being treated of his injuries, he goes to the Chans and tells them what he knows of Shendu.

Tohru is portrayed as a large Japanese man, weighing approximately 480 pounds and standing taller than most of the characters in the series. His main outfit consists of a white T-shirt with brown overalls and brown sandals. He has black hair in a chonmage hairstyle, which is the traditonal hairstyle of samurais and sumo wrestlers.

Tohru is generally a rather slow person, both physically (because of his great bulk) and mentally. This does not mean that he is completely stupid, only that he goes rather easy on letting his mind do the hard work. During his time with the Dark Hand, Tohru was ruthless and would carry out any orders by Valmont to the limits of his efficiency and, if possible, beyond that. Ever since he quit the Dark Hand and joined the Chans, he has become more demure, easygoing and likable (mostly because of being in a more friendly place), and is very protective of his new friends and family. He is especially fond of Jade, with whom he has a brother-sister relationship. He even once threatened to turn his old master Valmont inside out if he doesn't keep Jade safe, as well as break free of the Mountain Demon Chi's power when Jade screamed. He often finds himself being pulled into Jade's plans.

Tohru knows detailed and important information about the Oni from childhood stories told by his mother, which become vital during their hunt for the Oni Masks. He is very fond of kittens, likes grape soda and hates fish (which is a cultural irony, considering that in Japan fish makes up a large part of the local diet). The only things he truly fears are Oni and his formidable and constantly critical mother. He also refuses to hit women, as show when faced with the world's strongest woman, who was hired by Bartholomew Chang. However, this statement can be contradicted considering that he once attempted to cut open Jade's stomach to retrieve the Rooster Talisman and that he was ready to fight Viper's clone with no signs of holding back.

Tohru enjoys serving people, especially those he likes. In The Chosen One, he's dismayed at being forbidden to do chores he'd normally be happy to do. And he shows a great deal of tolerance for other people's antics and bossing (like those of Jade and Uncle), rarely voicing his opinions forcefully.

But Tohru has one condition in exchange for his loyalty: appreciation. His mother's acceptance means so much to him that he briefly considered working with a Japanese crime syndicate in order to regain that acceptance. He put up with Valmont's ungrateful attitude for a long while until he was forced to fight Shendu with obviously slim chances. And he finally got fed up with Uncle in The Demon Behind for attempting to overwork him instead of thanking him.

Little is known of Tohru's past with many details of his early life such as his childhood, adolescent years or even his surname and the identity and status of his father or other family (aside from his mother) being relatively unexplored. It is known that he was born a native Japanese citizen and, even as a child, is shown to have been very large. He developed a crippling fear and frequent nightmares of the Japanese demons known as Oni as a boy which was brought unintentionally on by his mother, who told him stories of their monstrous exploits against disobedient children so he would not misbehave. As an adult he moved to America at some point and became an enforcer for Valmont but did not especially desire such a life, only doing so because he was in need of money (which indicated he either did not receive a full education, or was unable to make enough money through legitimate means to support himself and/or his mother). Tohru was once the best enforcer for the Dark Hand who led Valmont's Enforcers during most of the talisman hunts on behalf of the dragon sorcerer Shendu, and a personal servant to Valmont. Despite his formidable size and strength, he proved to be no match for Jackie's martial arts skills and Jade's cunning. His string of defeats displeased Valmont so much that, for the hunt for one of the last talismans (the Pig), he hired the then-freelancer Hak Foo to ensure success of the mission - a switch which Tohru greatly resented.

Eventually, Tohru changed sides when the Dark Hand succeeded in reviving Shendu, who then double-crossed Valmont. Forced to fight Shendu alone, Tohru was quickly defeated and sent flying out the side of the building, which he survived with moderate injuries. After providing Jackie and his friends with the decisive clue to track and stop the demon (specifically Shendu), he turned himself in to Section 13's authorities. When Shendu possessed Valmont and intended to free his fellow demon sorcerers, Jade recruited him into the fledgling J-Team.

As part of the hunt for the demon portals, Uncle chooses Tohru as his apprentice in Chi sorcery. Tohru's magical skills become more proficient and independent over the course of the show. He also develops a sibling-like relationship with Jade, each understanding and protecting the other.

Tohru's fighting style is rather unique from the other characters in the series because of his large size, and combines the use of thrusts and tackles. He is not agile (and as such is unable to dodge attacks as well as Jackie or Jade). However, he has demonstrated fast reflexes at certain times, which is evidenced at one point when he blocked a swordfish Jade threw at him by using the Rooster Talisman. He is not afraid to use his weight to his advantage (which is evidenced by the fact that he used it to break open the water tower in order to defeat Valmont/Shendu).

Out of all the members of the J-Team, Tohru possesses the greatest amount of physical strength and endurance. He is able to lift a sumo wrestler who was 1/3rd larger than him completely off the ground, which means that he is able to lift more than 500 pounds. He is also able to withstand devastating attacks that could potentially kill a normal human but he was able to survive these attacks albeit with injuries or being knocked unconscious.

While working for the Dark Hand, Tohru would use more lethal attacks that could potentially kill his enemies, such as throwing a swordfish at the person or holding the person in a vice grip. Since joining the Chan family he prefers a more non-lethal approach in his attacks.

Tohru has a habit of picking up from his environment anything he can and using it as a weapon, like a giant boulder or boxful of tennis balls. In The Warrior Incarnate, Tohru shows that he can use a nunchaku to the point of twirling it around himself with surprising ease.

Over the course of the series, Tohru gains knowledge on using chi spells, which he mainly uses as means of banishing demons, removing Oni Masks, and trapping the Demon Sorcerers' powers. Unlike Uncle, he does not use chi spells by means of offense, preferring to use his physical strength when engaging in combat. 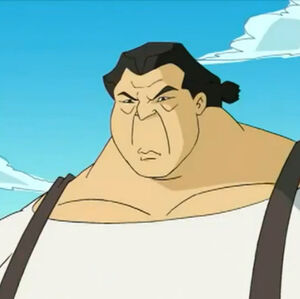 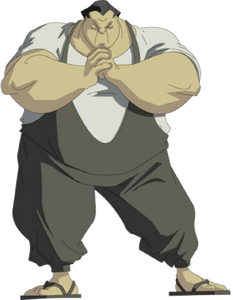 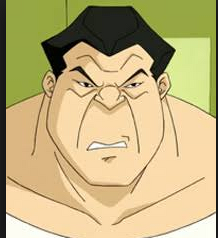 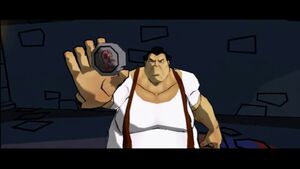 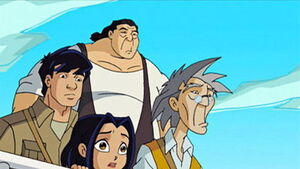