Kirby: Right Back at Ya!

To help Kirby and friends

Kirby
Tiff
Tuff
Meta Knight
Lololo and Lalala
many others

Tokkori is the secondary tetartagonist of Kirby: Right Back at Ya!. He is a loud-mouthed, and cranky bird who teases Kirby for his amusement, and also uses him for protection purposes.

His first appearance in the anime was the very beginning of the first episode as a cameo, sleeping. In "A Blockbuster Battle", when a storm came and Kirby needed to find shelter, he accidentally took Tokkori's nest. When Kirby needed a job, King Dedede told Tokkori to sabotage Kirby's attempts to find work. At the end, Tiff and Tuff built a little house for Kirby. In the third episode, Tuff finds that Tokkori took Kirby's house. Now, he rarely lets Kirby sleep in the house or just lets him in for some rest while he watches Channel DDD. However, he has shown kindness towards Kirby, even if it's in a superficial way. He also has a cowardly side, as shown when he got lost in Whispy Woods Forest along with Kirby, Tiff and Tuff.

He is a selfish, arrogant, rude, and greedy bird who dislikes Kirby and picks on him, much to Tiff and Tuff's chagrin. An example of Tokkori's selfishness is in episode 49, where Kirby told him nobody wants to play with him and Tokkori told him that the reason nobody wants to play with him is that "nobody likes him", which hurt Kirby so much that he left Cappy Town, and when Tiff and Tuff find out about this, they get really angry with him and force him to find Kirby. He has also shown kindness to Kirby, even in a superficial way, as shown when Kirby's in trouble, he will get help and lets him sleep in his home with him while he watches Channel DDD.

Tokkori does not take kindly to Kirby's intrusion into his nest. 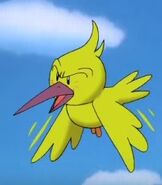 Tokkori sitting on Kawasaki's hat
Add a photo to this gallery
Retrieved from "https://hero.fandom.com/wiki/Tokkori?oldid=1712312"
Community content is available under CC-BY-SA unless otherwise noted.