Toko Fukawa (written as Touko Fukawa in Japan) is one of the six main characters from the Danganronpa series. She has the title Ultimate Writing Prodigy and she suffers from dissociative personality disorder. Her other personality comes out when she sneezes, or upon seeing blood (which also makes her faint prior). That other personality is known as Genocide Jill (also known as Genocide Jack or, in Japan, Genocider Syo, among those who aren't aware of her gender) who has the title Ultimate Murderous Fiend.

In the games, she and Jill are voiced by Miyuki Sawashiro in the Japanese version, and by Amanda Céline Miller in the English version.

In the anime, she and Jill are voiced by Miyuki Sawashiro in the Japanese version, and by Carli Mosier in the English version.

She is a depressed novelist with a persecution complex. One of her romance novels, Before the Sea's Scent Fades Away, was a huge hit that managed to make fishermen become popular with teenage girls for a few months. Despite her young age, she has already won several awards and is constantly on the top selling list.

Toko survived the final trial and escaped with the other survivors at the end of the game.

Fukawa is always seen in an attire that consists of a dark female Japanese sailor school uniform, worn with a noticeably lengthy skirt compared to the other girls (and Chihiro), and her glasses. The length of her skirt is related to her dissociative personality disorder, as it hides the marks she carved onto her upper thighs as Genocide Jill.

Genocide Jill's appearance is much like Toko's since she is still technically Toko, however some things differ and her general composure changes. Her eyes become red and she usually wears a wild facial expression, coupled with her long tongue that hangs out over her sharp teeth. She also has tally-mark kanji characters carved onto her upper thighs, one for each victim she murders.

Due to her severe persecution complex that originated from the bullying that she had to live through early in life, Toko is highly suspicious of other people, frequently accusing them of thinking bad things about her; her unusually quick tendencies to self-victimize quickly characterized her interactions with most of Class 78.

Because of that, Toko was more anti-social and would rather be a blind follower of the group, even if the populist ideas clearly did not fit the situations. For instance, during the first Class Trial, Toko quickly judged Makoto as a killer just because Sayaka was in "his" bathroom, before he explained that Sayaka had switched rooms with him.

Being a fan girl to her self-professed Prince Charming, Byakuya, Toko could often be seen stalking him, seeing him as the "ideal boyfriend". After the revelation of her counterpart, Genocide Jill, Toko's crush on Byakuya took on a more distinctively sexual undertone, and she was depicted as being capable of neither proper judgement, nor of control over her perverse fantasies.

Her obsession towards Byakuya was her major motivator to action, to the point of inflicting hurt on others, as she notably did to Hina (in the form of Genocide Jill), cutting Hina on her arm in revenge for Hina slapping Byakuya over his antagonizing the exposed mole that was Sakura.

Toko was known to be extremely hemophobic. Any sight of blood would make her faint, causing a murderous split personality of hers known as Genocide Jill to awaken.

Unlike Toko, Genocide Jill is very loud and straight to the point. Willing to give anything away, in Chihiro's murder trial she reveals (almost) everything about herself. She obsesses over Byakuya, using honorifics such as "-sama" which indicates that she has a submissive side - as this honorific is used primarily in addressing people much higher in rank than oneself. She is also quite lewd at times, not hesitant to harass Asahina over her figure or make inappropriate remarks to other characters. Jill is a self-proclaimed fujoshi and says that she only kills cute boys who "turn her on".

It is revealed in the final chapter that although her alternate personality had her memories of her past stolen, Genocide Jill still remembers due to the fact that the two personalities have the same knowledge, but not the same memory. When shown the images of the outside world, Genocide Jill identifies that as the disaster that happened to the world as a result of "The Biggest, Most Awful, Most Tragic Event in Human History". 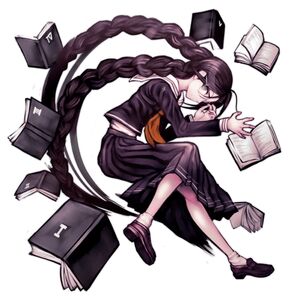 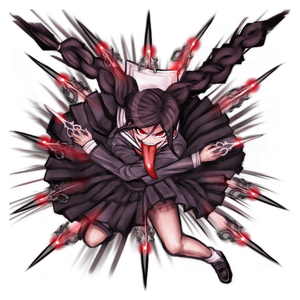 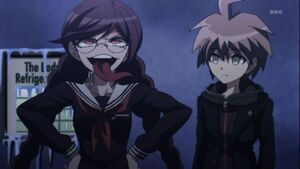 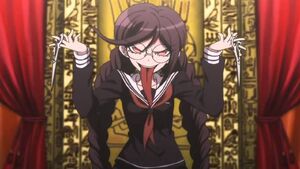 A full-body render of Toko as she appears in Danganronpa: Trigger Happy Havoc 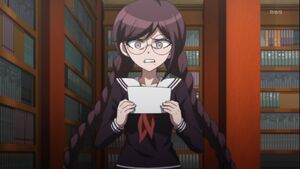 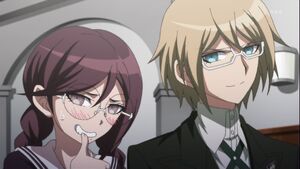 Toko with Byakuya in the anime 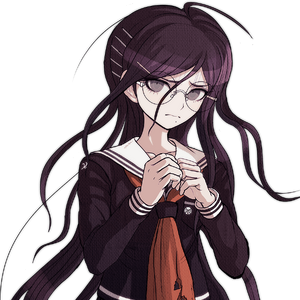