Wizard
Member of The Magical Line Of Crowe

To stop the Nekross from taking Earth's magic (succeeded)

Thomas Robert "Tom" Clarke is the son of Michael and the late Helen Clarke, the grandson of Ursula Crowe and Simeon Swann and the main protagonist of the CBBC science-fantasy series Wizards vs. Aliens. He is played by Scott Haran.

Not much is known about Tom's early life but that he was born to a female wizard named Helen Clarke, whom he inherited his magic from, and her Unenchanted (non-magical) husband Michael sometime in 1996. On Halloween night in 2006, a ten-year-old Tom along with his mother drove to some ancient ruins where Helen was told by another wizard that a thing known to wizards as the Entity (which was actually a probe sent to Earth by an alien race called the Neckross to look for magic which they ate) was there so Helen told Tom to stay in the car until she got back. Eventually Tom decided to follow her, but ran into the probe which was about to attack him. Luckily, Helen arrived and stopped it from attacking him by shooting magic at it. However, due to it being Nekross technology, the magic did not harm the probe and it fought back and killed Helen.

Six years later in 2012, a now sixteen-year-old Tom lives with his father and his wizard grandmother Ursula. He originally used his magic to do normal everyday things such as his homework and when he was playing football, much to Michael's dismay who wishes for him to only use magic for serious things and only at home.

One day whilst on a school trip, Tom, along with his other classmates, went to the Gathering of Stones where the class geek Benny Sherwood found a ring lying next to them just as their teacher Miss Webster was possessed by a voolox and put under Nekross control in order to get hold of the ring as it contained magic. After returning from the school trip, Tom ran into Benny who was being pursued by the possessed Miss Webster who tried to shoot at them, but Tom used his magic to protect him and Benny and free their teacher from the voolox control. Later, Tom and Ursula run into a female Nekross called Lexi who beams them up to the Nekross's ship where they meet Lexi's brother Varg and their father The Nekross King, but Tom escapes, but returns with Benny and Michael to save Ursula, but due to wizards only being able to perform three spells a day Tom used up all his magic and needed to wait until sunrise to perform more.

Luckily, due to being in space, the sun appears so Tom is able to save his grandmother along with two other wizards named Robert France and his son Mark (who had his magic extracted from him by the Nekross turning him into a old man) and uses magic to enchant Michael's car to escape the ship. After they return to Earth it is revealed that the ring Benny found is Robert's so it is given back to him and Tom vows to protect the magic of Earth from the Nekross.

In the episode, Vice Versa, Tom, Benny, Michael and Ursula encountered a Hobbledehoy named Squiggly who cast a spell that caused Tom to have Benny's intelligence and Benny to have Tom's magical powers and football skills. At first, Tom didn't mind this as the intelligence helped him with school work, but after a while, he stared to miss being magical as it was the only thing that he had that connected him with Helen. But later in the episode, another Hobbledehoy named Stickley reversed Squiggly's spell and Tom got his magic back.

In the episode, The Curse of Crowe, Tom and Benny were cursed to forget their friendship by a wizard named Gemma Raven (which she did to save her mother from the Nekross). But when one of their spats got them put in detention, their memories of their friendship returned.

Currently, Tom still battles the Nekross now led by a now King Regent Varg and his wife; the Queen Regent Lady Lyzera. Tom also had to deal with Benny going off to America to attend The Massachusetts Institute of Technology. Tom later meets and befriends a girl named Jazz who helps him fight the Nekross and The High Wraith Warlock (who had previously battled Tom's ancestor Caractacus Crowe).

Tom has had three love interests in the series

Katie is a classmate and friend of Tom's at their school King's Park High. Tom has been shown to have feelings for her, which she returns but much to her dismay, Tom is unable to spend time with her as he has to protect Earth's magic from the Nekross (which Katie is unaware of). She did briefly learn that Tom was a wizard, but couldn't cope with it so because of this, Tom cast a spell to erase her memories of knowing he was a wizard.

Chloe is a female wizard whom Tom met after hearing about her going to perform magic on a show which would be broadcast worldwide in the audience of 100 other wizards (unaware that this was part of the Nekross's plan to take magic). After stopping the Nekross's plan Chloe and Tom agreed to go on a date. Unfortunately, this relationship didn't come to be as the Nekross took Chloe to their ship and extracted her magic turning her into an older woman. Tom was unaware of this and one the day of their date, assumes that Chloe had changed her mind and left with Benny, whilst an aged Chloe watched on.

At first, Tom and Lexi were enemies due to her and the other Nekross wanting to extract Earth's magic. However, in the episode Friend of Foe, Lexi took a human form named Lucy to try and get Tom, but both were kidnapped by a woman named Stephanie Gaunt who wanted to use Tom's magic and Lexi's alien technology to steal the Crown Jewels but the two worked together to defeat Gaunt and escaped.

In the series 2 finale All Out War, Lexi was pitted against Varg by Chancellor Kooth in the Contest of Devourment to see who could capture Tom to which Varg was successful and Lexi was to be eaten by The Nekross King but she revealed that Tom was her friend causing the King to disown her. Later, Lexi takes a extracted Tom to a window where the sunlight can gave back his magic but whilst getting there, she catches a contamination so in order to save her, Tom after drinking raw magic, turns Lexi into a human and sends her to stay on Earth with a resurrected Benny Jr. (as she had wished to see him again) so she would be happy on Earth. 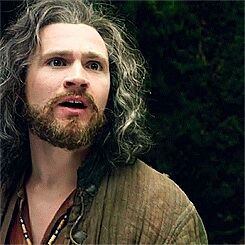 36-year-old Tom in the Neverside. 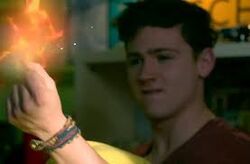 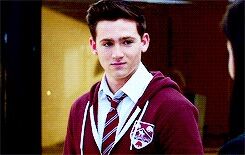 Tom in his school uniform.
Add a photo to this gallery

Retrieved from "https://hero.fandom.com/wiki/Tom_Clarke?oldid=1859338"
Community content is available under CC-BY-SA unless otherwise noted.