Styling hair, Speaking on the radio

Make DJ Kitty say 'I love you' back

Tom Kan is a hero from the 2002 Hong Kong romantic comedy film Women From Mars. He is a redeemed playboy who stands up for women against male chauvinism, helps his friends free themselves from a punishment originating from Hell, and defends himself from a scheming workplace rival. Tom is an Asian male in his mid 30s working successfully as a famous hair stylist for celebrities and later a radio deejay. He usually wears a business suit. His underwear of choice is white boxer shorts. His personality is very fluid ranging from happy-go-lucky to extreme agitation.

He is portrayed by Ekin Cheng.

At the beginning of the film, Tom shows he is a rich playboy. During his radio interview with the famous DJ Kitty, he refers to successful businesswomen in a derogatory manner. He attempts to court DJ Kitty several times and eventually succeeds. While dating DJ Kitty, Tom is shown juggling several relationships with other girlfriends. After receiving a punishment from Hell and hearing from several past women he wronged, Tom realizes that his behavior towards women has been atrocious and wants to have a genuine loving relationship with DJ Kitty. Unfortunately, one of Tom's coworkers sold photos of Tom philandering with a multitude of girlfriends to the press. DJ Kitty becomes caught in the media uproar and doesn't even go back to work because of the paparazzi waiting for her. Tom takes over DJ Kitty's job at the radio station. The station hires Tom because of his celebrity status and his recent scandal. As predicted by the station manager Fernando, Tom's show is a massive hit. Tom spends hours each day for almost a month on the radio getting calls from past girlfriends and being apologetic. He states over the air how he loves Kitty and has reformed from his playboy lifestyle. He spreads the message that women in society should be treated with respect.

When Tom was enjoying his playboy lifestyle he became friends with Michael and Bo, two men who disrespected women in their own way. Michael was a male chauvinist and Bo preyed on women's sympathies. During one night, all three men become infatuated with the same woman. The men follow the woman onto a minibus and find out she is a messenger from Hell. The bus takes everyone to Hell. When they are all at Hell the men learn they have treated women so badly during their lives they deserved to end up in Hell. Fortunately, Hell is filled to capacity and the men are allowed a second chance to live more virtuous lives. The messenger from Hell sends all the men back on Earth but with a punishment. The men find out that their penises are missing, two of them (Tom and Michael) begin to have menstruation cycles, and one of them (Bo) is slowly becoming pregnant. The only way for the punishment to be removed is to have each man sincerely say "I love you" to a woman and the woman has to sincerely say "I love you" back. All three discover how difficult it can be to make a woman say "I love you" back. Tom helps Michael see how his chauvinism ruined his relationship with his girlfriend Ruby by making Michael experience the humiliation of buying menstruation pads. Tom helps Bo see how awful Bo was to his girlfriend CiCi by giving Bo money to have an abortion. This was the same thing Bo did to CiCi when he found out she was pregnant. By showing Michael and Bo how to change for the better, Tom helped his friends get their penises back (lifted the punishment from Hell) and mend the broken relationships with their girlfriends.

While Tom was working at the radio station a coworker named Fung secretly found out that Tom didn't have a penis. Fung had peeked into a bathroom stall when he thought it was odd that Tom initially was at a urinal and then secretly went into a bathroom stall to pee. Fung's radio show was scheduled to end in a few days. Fung pitched an idea to Fernando to have the final episode of "The True Man's Show" as a live broadcast in Olympian City, a huge shopping mall. Fernando shot down this idea as a waste of money and personnel. Fung managed to get Fernando to tentatively agree to this idea by proposing the following scheme: get Tom Kan to be part of the show since he is a big star at the station and then reveal to everyone that Tom does not have a penis. After Fernando confirmed himself that Tom did not have a penis (by innocently brushing against Tom's groin), he fully agreed to Fung's ratings stunt. On the day of the broadcast, Fung's plan came to fruition but the results were not what he expected. After Tom was shown to be dick-less to the entire audience, Michael and Bo also bared their groins so Tom wouldn't feel alone. While on stage with his pubic area exposed, Tom captured the audience's sympathy. Coincidentally, DJ Kitty was in the audience and heard Tom's heartfelt words. After Tom sees DJ Kitty leaving, he runs after her. The audience and Fernando suddenly go after Fung. They try to pull off Fung's pants and underwear to see if he is also dick-less like Tom. Fung is seen fighting back both the audience and Fernando while vehemently saying he has a penis. While Tom is looking for DJ Kitty, Tom feels his penis has returned (meaning DJ Kitty sincerely said "I love you"). Tom finally finds DJ Kitty and the two share a loving embrace. 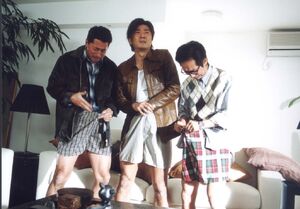 Michael, Tom, and Bo upset about Hell's punishment causing them to change and become heroes 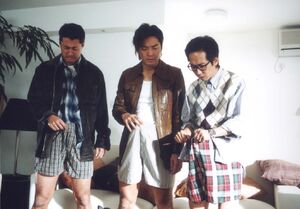 Michael, Tom, and Bo still in disbelief about Hell's punishment causing them to change and become heroes 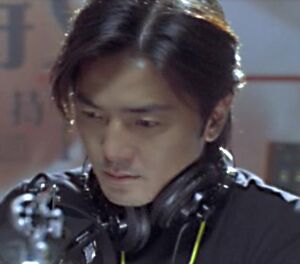 Tom as the new DJ at the radio station 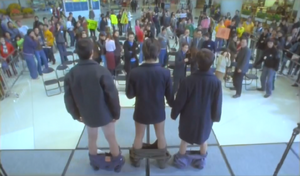 Tom humiliated by Fung, but Michael and Bo join in to lessen Tom's embarrasment 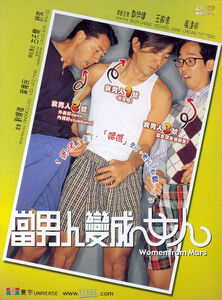 Promotional poster for movie
Add a photo to this gallery
Retrieved from "https://hero.fandom.com/wiki/Tom_Kan?oldid=1698513"
Community content is available under CC-BY-SA unless otherwise noted.