Turning his apartment into a frozen wonderland

Having fun with his Penguins

To get rid of the penguins (formerly)

To save the penguins from Nat Jones

Thomas "Tom" Popper Jr. (also known as Mr. Popper) is the main protagonist of the book Mr. Popper's Penguins and the 2011 comedy film of the same name.

One day, workaholic entrepreneur Tom Popper inherits 6 gentoo penguins and soon discovers they make him closer to his family. But greedy zookeeper and penguin expert Nat Jones is willing to do whatever it takes to get the penguins into his zoo for wealth even if it means breaking into Popper's house and ruining his life.

He is played by Jim Carrey, who also played Lloyd Christmas in Dumb and Dumber, Horton in Horton Hears a Who, The Grinch in How The Grinch Stole Christmas!, The Mask in the 1994 film of the same name, Colonel Stars and Stripes in Kick-Ass 2, and Ace Ventura in Ace Ventura: Pet Detective.

Thomas Popper Jr. grew up where his father was a worldwide explorer and was extremely workaholic; barely ever returning home. Young Popper would often voice call his father code name "Bald Eagle to Tippy Toe."

In present day New York City, Popper seems to have inherited his father's workaholism; He spends most of time on his work as a real-estate entrepreneur and has spent so little time with his family that he and his wife Amanda recently divorced; and he doesn't pay much attention to his kids Billy and Janie.

One day, Popper hears that his dad died during an expedition to Antarctica and discovers that his father's will has given him the most unusual gift of all: a live Gentoo penguin. He tries to get rid of it, but due to a miscommunication on the phone, Popper accidentally orders five more. When his children and ex-wife show up to celebrate his son's birthday, the kids are taken with the penguins. And Popper finally gets to connect with his kids while his work suffers. So he names the six penguins Captain (the leader), Bitey (who bites a lot), Lovey (who hugs), Loudy (squawks the loudest), Stinky (who farts), and Nimrod (who constantly bumps into things).

Meanwhile Greedy zookeeper and penguin expert Nat Jones has heard about the penguins. He is willing to do whatever it takes to get the penguins into his zoo for wealth, even if it means having to break into Mr. Popper's home to steal them, or ruin Mr. Popper's life. However, Mr. Popper tries to stall him, asks Jones to collect them another time. Jones initially tries to refuse by claiming that penguins can only survive in zoo temperatures but Popper through a promise he cannot keep, manages to convince Jones.

At work, Popper is given the task of buying Tavern on the Green, an old restaurant where he used to eat with his father as a child, with the intent of tearing it down and building a new development in its place. However, its elderly owner, Selma Van Gundy, is only willing to sell it to a person of true value. Popper has unsuccessful meetings with her, and she refuses to sell to him. Having the penguins around helps Popper become closer to his children and he and Amanda begin re-dating.

When Popper returns to his apartment from his date, he sees Jones trying to lure penguins into a cage and angrily confronts him. Frustrated with both his plan having failed and that Popper is loving the penguins like children, he demonstrates his talent to brainwashing the penguins onto his side (raw fish) but realizing that Popper is not intimidated Jones angrily leaves vowing to get the penguins one way of or another.

The penguins eventually lay three eggs. Two eggs hatch, and one doesn’t. Popper becomes obsessed with seeing the last egg hatch, losing his job in the process when he angers his bosses for not focusing on the tavern. A visit from Jones tells Popper the egg won't hatch and Popper reluctantly sleuth penguins back to Jones. While Popper regains his job, his family is extremely disappointed of him selling the penguins back. And Amanda prepares to go to Africa with her boyfriend and leave the kids in his care.

Popper finds a lost letter from his father telling him to hold his children close and love them. Having a change of heart, Popper asks his Amanda, Janie and Billy to help him get the penguins back from the zoo. The family bursts into Jones' office. Jones claims that the penguins have already been shipped, but a loud honk from the holding tank exposes him of lying. Luring the birds with sardines, Jones steps into the holding tank, only to have Popper shut him in. Jones with technologies manages to escape and has the Zoo exits and entrances locked up. However thanks to Popper's friend Pippy, the group escapes the zoo with the penguins. Jones calls the police and tries to humiliate Popper at a meeting but Popper is able to show the police that the penguins love him as well as telling them how his father gave him the penguins as a gift. When realizing through investigation about how Nat Jones broke into the apartment and was willing to break the law to get the penguins, the police turn on Jones and arrest him.   Van Gundy protects Mr. Popper from arrest due to her friendship with New York's Mayor, thus leaving Popper in custody of the penguins.

The film ends with the Popper family traveling to Antarctica with the penguins, allowing them to live with their own kind and promising to visit. Captain, is revealed to have laid another egg. Popper tells his children that they'll visit when the baby is born. 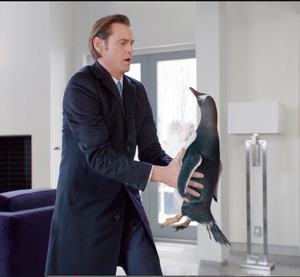 Popper receives the first penguin in the mail. 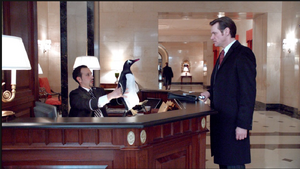 "Darrell, what are you talking about? That's not my penguin." 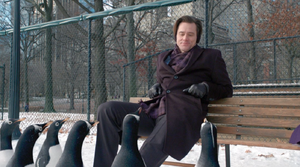 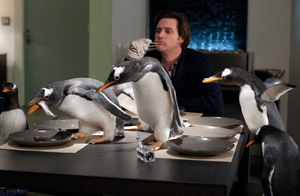 Penguins at the table 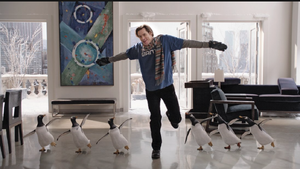 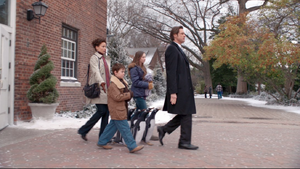 The Poppers sneaking the Penguins from Nat Jones 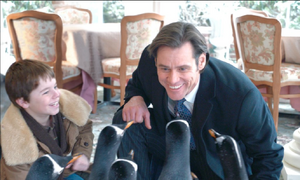 The penguins choose Mr. Popper over Nat Jones' sardines, much to Jones' dismay and Popper's delight