Heroes Wiki
Register
Don't have an account?
Sign In
Advertisement
in: Articles under construction, Movie Heroes, Book Heroes,
and 20 more

Treasure hunting with his friends

To go treasure hunting with his friends (succeeded)

Tom is imaginative, dreaming of finding treasure. He always finds ways to get out of a jam, going to school, or doing work. He is also sacrificial, as he took the punishment for Becky to show his chivalry.

Tom Sawyer and his half-brother Sid are on their way to school when they see Huckleberry Finn fishing. Tom skips school to join Huck, but changes his mind after he sees Becky Thatcher. He tries to sneak into class, but Sid snitches on him to the teacher, Mr. Dobbins. Tom is made to sit with the girls, which he actually likes since he's able to sit next to Becky. He is also sat beside Amy Lawrence, a friend to whom he became "engaged". She still has romantic feelings for him but he is too transfixed by Becky to notice. Tom's pet frog Rebel then disrupts the class, meaning they are given early dismissal.

On the way home from school, during the musical number "Hook, Line and Sinker", Tom tries multiple times to steal a kiss from Becky, but is thwarted each time by her father, Judge Thatcher. The next day, as Tom is about to go fishing with his friends, Aunt Polly makes him paint the house as punishment for what happened at school. Tom, however, gets his friends to paint the house for him instead.

That night, when Tom and Huck go treasure hunting, they find Injurin' Joe and his friend Mutt Potter uncovering a chest of gold. Deputy Bean, who is visiting his wife's grave, discovers Joe and Mutt. As the boys watch from behind a tombstone, Joe brutally murders Bean who tried to hit him with a shovel, frames Mutt and captures Rebel. Tom knows that Joe can track him down through Rebel, so he and Huck make a pact never to tell anyone what they have seen. 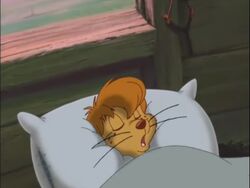