Heroes Wiki
Register
Don't have an account?
Sign In
Advertisement
in: Video Game Heroes, Fantasy Heroes, In Love,
and 22 more

Get back to his dimension. (Project X Zone)

Toma is a playable character from Shining Force EXA. He is one of the game's two protagonists.

When Toma was little, he was found by the Highlanders who roamed around the area. Orphaned by his biological parents, Toma was taken by one of the highlanders and raised as a part of the nomadic tribe. Unfortunately, five years from the present, a war broke out between Fyrland and Noswald that devastated much andclaimed the lives of many innocent people-- including Toma's father. This led the young Toma to set out on finding power that could defeat Fyrland and Noswald and prevent a future war from ever breaking out again.

Toma is fiery, impulsive, cocky, and a bit of a simpleton; however, he is kind, honest, and cares for the well-being of others. He has no difficulty speaking his mind and leaps into battle without hesitation. As a character, he is the diametric opposite to Cyrille.

Toma is mostly, if not purely, a close-combat fighter. As such, his strengths lie in taking and dishing out large damage quickly. However, he is not as adept at weilding magic (though this can be adjusted to some degree by carving power arts). It is recommended when carving arts for Toma to stick to Weapon Attack, Master Guard, Stunning, Stun Resistance, Knock back, Knock back resistance, Critical Strikes, and resistances to Critical Strikes. Also, it is imperative to gain resistances to the elements as magic will make short work of Toma if you are not careful.

Be sure to assemble weapons that have Anti- prefixes to help make short work of enemies.

Toma makes an appearance in Project X Zone. He is a playable character who is partnered up with Cyrille .

Toma is a cheerful, tough and wild youth from a tribe in the mountains, who is also one of the masters of the holy sword Shining Force. He has a very direct personality, and generally acts before thinking. While traveling with others from his tribe, they got caught up in the conflict between humans and demons, and most of them were killed. Barely surviving himself, Toma vowed to become the new king and bring an end to all wars. He set out in search of the holy sword said to have the power to rule the world. Having successfully become the master of both the holy sword and the "Geo-Fortress," he now fights alongside Cyrille to bring peace. 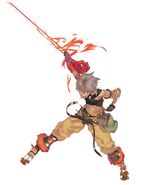