Tommy is a supporting character in The Last of Us and The Last of Us Part II. He is the younger brother of Joel, who survived the infection outbreak and left his brother to join the Fireflies. After leaving from the group, he continued to survive by starting his own settlement, and created a safe haven for people and families. After his brother's brutal death by Abby Anderson, Tommy and Ellie decide to get revenge at the cost of suffering.

Tommy was born during the 1980s in Texas to unnamed parents, and had an older brother, who raised him. Not much is known about Tommy's early life, the brothers were close and had an interest in college football. In addition, Tommy and Joel rented motorcycles and went on a cross-country ride for Tommy's birthday.

After Joel had a daughter named Sarah, Tommy went with his brother and his niece to several events and carnivals, as shown in photos in her room. It's assumed that Tommy and Joel both worked together in Austin, as some dialogue suggest that the two do.

Tommy attempts to call Joel after the outbreak starts, having called him eight times as Sarah later notices. He appears when picking Joel and Sarah from their home, who had to kill an infected Cooper. Tommy drove them into town until and reached to Highway 71 on Texas State, but encounter a traffic jam.

Chaos erupts when the infection begin to attack, and a vehicle crashes into the side of car, causing the three to have to run on foot. With Sarah's leg broken, Joel carries her as Tommy guides them to safety, and they managed to escape from the chaos. Tommy holds the infected back, telling Joel to take Sarah to safety, and presumably killed them. Tommy returned to his brother, killing a soldier that was holding him at gunpoint. The soldier, however, had shot Sarah, causing her to die in Joel's arms.

Years following the outbreak, Tommy and Joel committed numerous acts of violence to survive, with Tommy later commenting that he suffered from nightmares from what they did. The two made it to a Boston Quarantine Zone, but Tommy was sickened by his brother, and decided to join the Fireflies after being convinced by Marlene. Filled with hope that they could make the world better, Tommy got into an argument with Joel, and they both parted ways.

Tommy spent a long time with the Fireflies, and even visited the group's main research lab in the University of Eastern Colorado. Tommy became disillusioned with the cause, and left the Fireflies and told Marlene that if she needed any assistance, to go to his brother. Tommy reached to Jackson Country, where he help make a safe haven for people and families, and married a woman named Maria.

The two became leaders of the settlement, and worked at the hydroelectric plant to fix on generators, but were occasionally attacked by bandits. Despite losing most of his belongings due to the outbreak, Tommy had a photo of Joel and Sarah at a soccer match, but it was slightly faded.

In the fall of 2033, Tommy reunited with his brother, and met his companion, Ellie and were brought into the settlement after introducing Maria to Joel. Tommy and Joel had a conversation alone where Joel told Tommy that Ellie was immune to the Cordyceps Brain Infection. He also wanted Tommy to finish the journey, and wanted to collect himself some gear to be on his way. Tommy refused, stating that his purpose in life was his family, causing an argument to ensue.

The argument was broken when a group of bandits attacked the settlement, and the brothers managed to fend off the attackers. Tommy reconsiders his decision after seeing Ellie interact with Joel, but Maria is upset when he tells her he's going. Ellie steals a horse and runs away, causing Tommy and Joel to give chase, and tracker her down before she gets killed. The brothers are ambushed by another group of bandits, and managed to kill them, and later found Ellie at an abandoned ranch.

Tommy decided to stay down stairs and keep on look out, as he knew Joel and Ellie needed to talk on her running away. He notices more bandits are coming, and tells the two to prepare for another fight, and the group managed to kill their attackers. Afterward, Tommy takes the two to the dam, where he shows them how he turned Jackson County into a fortified town, and Joel decides to take Ellie to the Fireflies. Tommy tells them that the Fireflies have a lab in the University of Eastern Colorado, and tells Joel and Ellie that they are always welcomed back to the settlement.

Months later, Joel and Ellie return to the settlement after the former stole Ellie from the Fireflies. Tommy accepts them as he promised, giving them room, and intends on getting his brother hitched with a woman named Esther. 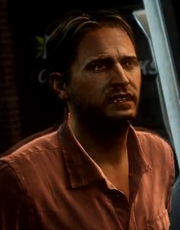 Tommy during the start of the outbreak. 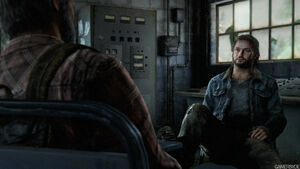 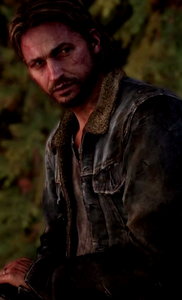 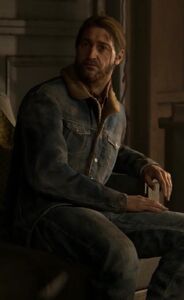 Tommy in The Last of Us Part II. 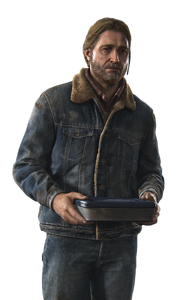 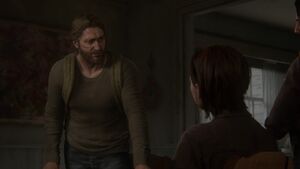 Tommy chides Ellie for breaking her promise to kill Abby.
Add a photo to this gallery

Retrieved from "https://hero.fandom.com/wiki/Tommy_Miller?oldid=2010251"
Community content is available under CC-BY-SA unless otherwise noted.