Youkai
Tomoe (巴衛) is a fox yokai, presently serving as the familiar of Nanami Momozono in the manga and anime series, Kamisama Kiss.

Tomoe's over-the-top good looks earn him a bevy of admirers wherever he goes. He usually merely tolerates the attention, rejecting any deeper connection.

Tomoe appears to be in his late teens or early twenties. His hair is silver-white, normally worn short but in ages past he allowed it to grow quite long. His ears are large and fox-like, and he is able to manipulate them in a similar fashion. His eyes are angled similarly to a fox's, with violet fox-like pupils that darken with strong emotion. He also appears to wear eyeliner but that's most likely not true. He has a very fluffy, full, white tail.

After the ten-year time skip, Tomoe appeared with shorter hair compared to his original appearance. His fox ears are also gone due to the fact that he was no longer a yokai, a fox spirit.

Tomoe bears many of the traits one might expect from a fox yokai; he is handsome, cunning, sly and possessed of a certain allure that those he meets often find difficult to resist. He does not appear to be wholly unaware of his attractiveness, and is quite pragmatic about employing both his looks and his charms when it suits him.

Tomoe's unusually strong sense of loyalty and honor. It was largely this that bound him to Akura-Ou, that kept him standing watch over Mikage's crumbling shrine for twenty lonely years, and that causes him to go above and bey.

Tomoe remains short-tempered, proud, and fiercely protective of those he cares about. No obstacle has proven too great to keep him from Nanami's side.

In Chapter One of the Manga (First Episode of the Anime), Tomoe has been abandoned by his former master, Mikage, and left to care for the land god's crumbling shrine alone for the last twenty years.

When a powerless young girl named Nanami turns up on the shrine's doorstep bearing the wayward god's mark, Tomoe is furious. He refuses to become her familiar and vanishes, deciding instead to give himself over to a life of sloth, drink and debauchery. However, in the world "over yonder" things rarely go to plan, and through desperation and cleverness. 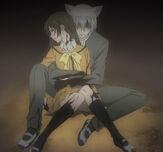 Retrieved from "https://hero.fandom.com/wiki/Tomoe_(Kamisama_Kiss)?oldid=1863791"
Community content is available under CC-BY-SA unless otherwise noted.