No Matter How I Look at It, It's You Guys' Fault I'm Not Popular! (WataMote)

Insecure Loner
Tomoko Kuroki is the protagonist of No Matter How I Look At It, It's You Guys Fault I'm Not Popular! ("WataMote"). Socially inept and often desperate, the series chronicles her various attempts to try and be more popular at her school. Tomoko has a grim outlook on life, to the extent that during a day dream, she imagines herself on a motorcycle, only to crash and end up in the hospital. She often has heavy bags under her eyes due to staying up too late playing games or watching anime. She is also rather perverted at times. However, she is often fairly optimistic, for example, she believes that it will only take about a month to get a boyfriend.

She will often imagine dubious situations with other boys or lust after her best friend, Yū Naruse. Tomoko also has a younger brother named Tomoki Kuroki, and a cousin, Kī.

Tomoko starts off excited about high school, having over 50 years of dating experience of 100 boys in Otome games whilst in the real world she is a shut in. However, once at high school, she finds things aren't going considerably well as having reached May without her talking to anyone in her class. It is at this point she decides to try and make herself more popular.

Tomoko has varying degrees of success with this, ranging from embarrassing herself to some success. She often turns to either her brother, Tomoki, or her best friend Yū Naruse to ask for advice, often to help with her own plans, which are usually somewhat perverted and generally backfire.

Though she has little to no success at first, she has slowly gained people's respect, and in her second year she has managed to get make a friend, Nemoto, in her class whom she talks to. She also befriends a member of the culture festival committee, though she has had very little interaction with the latter. It is also apparent that she has become slightly more confident in dealing with other people in social interaction. For example, being able to had over her home ec. ingredients, something she had been unable previously. 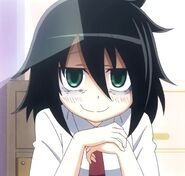 Add a photo to this gallery
Retrieved from "https://hero.fandom.com/wiki/Tomoko_Kuroki?oldid=1857633"
Community content is available under CC-BY-SA unless otherwise noted.