Hanging out with Youhei Sunohara.
Spending time with Nagisa.

Tomoya Okazaki is the main protagonist of the visual novel and anime series Clannad. He’s been labelled as a delinquent, due to his habit of arriving late to school, skipping classes, and staying out all night. He is the type of person who thinks deep thoughts about his life, but usually does not voice them out, as stated by Nagisa Furukawa, his main love interest in the series.

He is voiced by Yuuichi Nakamura and Fuyuka Ōura as a child in the Japanese version, and by David Matranga in the English version.

Tomoya has a sarcastic and cynical side to his personality. From the beginning of the series, he deeply resents his town, Hikarizaka, due to the bad memories he experienced while living in it. He also holds a grudge against his alcoholic father, Naoyuki Okazaki, especially ever since during a fight with his father, where he got a permanent injury on his right arm, which he could no longer lift higher than his shoulder, that led him to quit basketball. Due to arriving late to school, skipping classes, and staying out all night ever since the incident, he is labelled as a delinquent, but he doesn't go around looking for fights. However, when he does get into a brawl, he is shown to be a tough fighter.

He does enjoy having company, like hanging out with his best friend, Sunohara, as well as playing lighthearted pranks on people, especially Sunohara or Fuko. Occasionally, he teases Nagisa or the Fujibayashi twins. Tomoya cares deeply for all of his friends, especially Nagisa, and willing to solve their problems. Tomoya is shown to think deeply about his life and expresses his thoughts and opinions.

Tomoya is an average young man with blue hair. His hairstyle and facial expression gives off a delinquent vibe to his fellow schoolmates. It is noted by Tomoyo that he is rather handsome. As a student, he wears the Hikarizaka Private High School uniform. Although, sometimes he doesn’t wore the yellow jacket, especially during the summer. 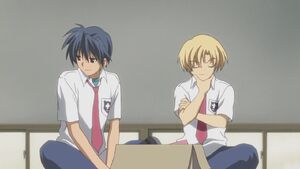 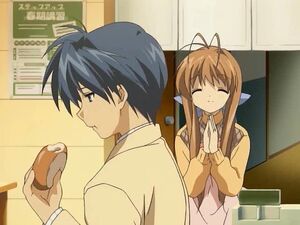 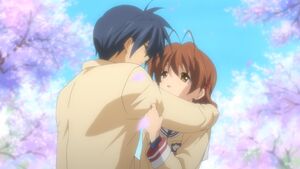 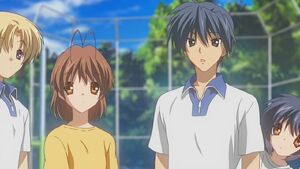 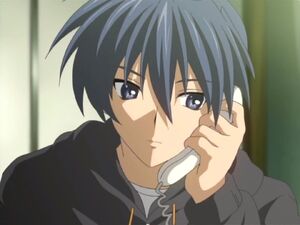 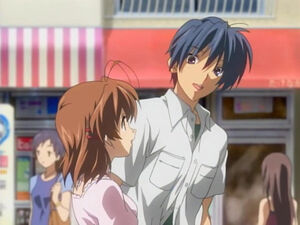 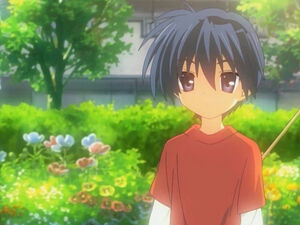 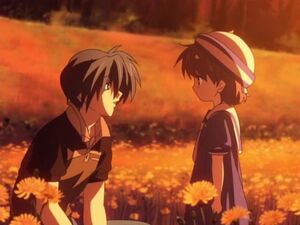