Boss of the Leone Crime Family

Working at his Ma's restaurant

Steal money and become rich while killing anyone who gets in his way.

Antonio "Toni" Cipriani is the main protagonist of Grand Theft Auto: Liberty City Stories, and one of the two pentagonists (alongside Donald Love) in Grand Theft Auto III.

He is a made man in the Leone Family, having risen through the ranks in 1998 and becoming a capo, and helps run Momma's Restaurante with his mother in Saint Mark's. Michael Madsen voices Toni Cipriani in GTA III, having also appeared in Reservoir Dogs, whilst Daniel Mastrogiorgio voices him in GTA Liberty City Stories, having also appeared in The Lost Don.

Michael Madsen voiced Toni in III, whilst Danny Mastrogiorgio voiced him in LCS.

Toni Cipriani was born in 1968 to Ma Cipriani and an unnamed father, who was a member of one of the city's mafia families. He lived with his parents in their restaurant and later became involved in Liberty City's criminal underworld, joining the mafia to follow on his father.

Toni left Liberty City and decided to lay low in Vice City after killing a rival made man (presumably Forelli or Sindacco family) under orders from Don Salvatore Leone. He finally returned to the city in 1998, ready to continue his life of organized crime. A grateful Salvatore Leone gives Toni jobs, but because he was out of town for so many years, other members of the Leone Family have had the time to move up in the hierarchy. Salvatore was forced to strip Toni out of his rank and give the position to Vincenzo Cilli during his leave of absence. Toni now finds himself as a low-ranking goon that has to once again gain favor with the Don, in order to secure a leadership position in the family. Toni however works for Salvatore's wife Maria Latore who later on, develops feelings for Toni and has him to do her bidding, and tells him she loves him, but Toni does not feel the same way. However after learning Toni "has no money", she cuts ties with Toni, reminding him that she is Salvatore's girl and not to hit on her. Toni appeared in the game to be much thinner than his appearance in GTA III. Much of his efforts in achieving his goal of reclaiming his place in the Leone hierarchy include battling two other Mafia families, theForelli's and the Sindacco's via several means, allowing him to be "made" halfway through the storyline after killing the Liberty City mayor, Roger C. Hole. After being made, hismother calls off a hit she had put on her son. Later, Toni works for millionaire and mayor candidate, Donald Love and fights the Forelli's in order to help the Leone's own City Hall while protecting Donald. Donald Love is eventually found to be in league with Salvatore and Toni, which makes him unfit for the office in people's eye. After Miles O'Donovan has been elected mayor, Salvatore Leone is arrested on several crime charges, forcing Toni to pose as a lawyer named Lionel to take jobs from the police station where Salvatore is imprisoned.

Donald Love, in a stressful phone call, says that he has many propositions for him. Upon arriving at the flophouse, Donald Love says that he has plans that will make both Toni and himself rich again and orders Toni to kill real estate businessman, and Love's former mentor, Avery Carrington. Toni and Donald steal Avery's plans and bomb expert 8-Ball is paid to give them explosives in order to blow up Fort Staunton, causing the Forelli Family to lose a lot of influence. Toni is called by a mysterious woman, Toshiko Kasen, and asked to fight the local Yakuza organization. After Toni kills her husband Kazuki, a remorseful Toshiko commits suicide and a panicked Donald Love asks Toni for some help to take him to Francis International Airport as the Colombian Cartel are attacking to steal Avery's plans. Toni gets Love to the airport safely and Love brings with him the corpses of Avery Carrington and Ned Burner.

Salvatore is eventually released from jail, after being escorted to the courthouse by Toni, due to the Sicilian Mafia wanting Salvatore dead. After being released, Toni and Salvatore go to see the mayor, Miles O'Donovan, to get his charges dropped. However, Massimo Torini, a high-ranking member of the Sicilian Mafia, had the mayor kidnapped. Toni and Salvatore chase Torini and rescue the Mayor from Portland Rock, killing Torini in the process.

By 2001, Toni has become one of the highest-ranking members of the Leone Family, behind only Salvatore Leone. The police had attempted to connect Toni and Salvatore throughout 2001; however, they fail to link them beyond his mother's restaurant. Salvatore’s son, Joey, introduces the game’s protagonist, Claude, to Toni. Toni hires Claude to attack the Triads (Leone Family enemies), including trying to get protection money from Mr. Wong's Laundromat, destroying some Triad fish vans and the Triad owned fish factory in Callahan Point. Toni also introduces Claude to Salvatore Leone.

In 2001, Toni still lives with his mother and is frequently been seen in his family-run restaurant, where he provides Claude with jobs. The constant insulting from his mother about him not being able to be like his father and failing to meet up to her expectations had forced him to call the local chat radio station, Chatterbox FM, and complain about his mother's constant berating. After Salvatore Leone has been assassinated, it is believed that Toni will take control of the Leone Family simply because Joey Leone, Salvatore's son, hasn't exactly done much to help the family.

In GTA: Liberty City Stories, Toni is significantly thinner than his depiction in GTA III; this is commented or criticized by his mother, Maria and Salvatore Leone, with his mother and Salvatore in particular commenting about him not being fed well. By GTA III, Toni is much fatter and has aged considerably in the three years that have passed.

Toni's behavior in scenes of the game suggest that he is very loyal, but is very easy to irritate (of course, this may be in part of that he is surrounded by such strange people, for instance, Maria Latore, Joseph Daniel O'Toole and Donald Love).

When he is angry, Toni is capable of practicing extremely violent acts (like using an axe to kill Giovanni Casa and cut his body into small pieces), but he also seems to feel remorseful at times (like when he goes to the Cathedral to make a confession). However, like many other GTA protagonists, he too shows very little hesitation in killing anyone standing in his way and occasionally mocks them. Toni also believes that people should show proper respect to their parents, seen when he berates Vincenzo Cilli for receiving oral sex from a prostitute named Cheryl while talking to his mother, and how he desperately tries to please his mother. Like Claude, he will give drivers the finger if a vehicle stands in front of him and tries to mow him down.

Toni seems to be very loyal to his bosses (for example, he saves Salvatore from being crushed in a car which the Sindaccos used to kill Salvatore). However, after completing the story-line mission "The Sicilian Gambit", during the ending cutscene, Toni seems to be a little troubled and hesitant for not being paid by Salvatore the couple of million dollars he promised. 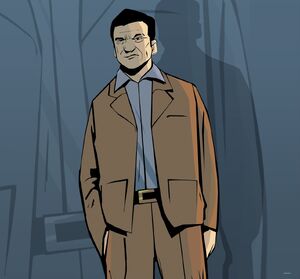 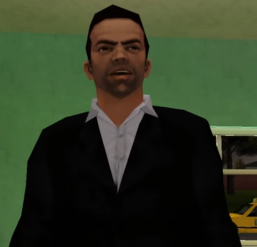 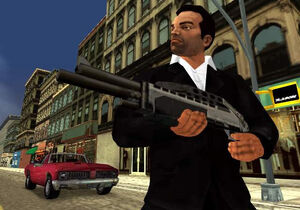 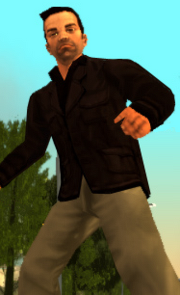 Retrieved from "https://hero.fandom.com/wiki/Toni_Cipriani?oldid=2215982"
Community content is available under CC-BY-SA unless otherwise noted.