The Indian
A crazy indian

to help the Lone Ranger

help the Lone Ranger fight the forces of evil

Fighter
Tonto is the deuteragonist of 2013 film The Lone Ranger. He's a native American and the loyal partner of the Lone Ranger.

Tonto first appeared when Butch Cavendish is holding a gun on him, only for John (The Lone Ranger) to free hime.

As Tonto was scouring the bodies for materials, John awoke and snatched his hand. Tonto rendered him unconscious with a rock and soon noticed a white spirit horse approaching John's grave.

In 1933, a young boy named Will met Tonto and asked about his adventures with the Lone Ranger. Tonto told him the story of their meeting and their stopping of Latham Cole. After the tale was told, Tonto left and began walking in the desert of his past adventures, alone. 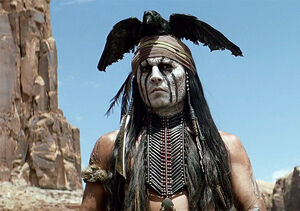 Tonto In The Canyon
Community content is available under CC-BY-SA unless otherwise noted.
Advertisement