No information
Too Loud Bear is a Care Bear and one of three characters introduced in the The Care Bears' Big Wish Movie in 2005 along with Me Bear and Messy Bear.

Too-Loud Bear has deep red fur and his Belly badge is a yellow and red bullhorn with a red heart mark on its side.

The fast-talking, wise-cracking Too Loud Bear may just think he's funnier than he actually is, but his jovial outlook on life means he can also find the lighter side to just about anything. As one of the three "outsider" Care Bears who migrated to Care-a-Lot along with Me Bear and Messy Bear, he may have a tough time fitting in with the rest of the crew, but darned if he's not going to make his presence known one way or the other. His running joke is that he constantly flubs other character's names.

Too Loud Bear makes his debut in the straight-to-video Care Bears film Big Wish Movie along with his friends Me Bear and Messy Bear. When Wish Bear uses her star friend Twinkers to wish for new neighbors, Care-a-Lot is visited by the three troublesome bears who immediately take a liking to their surroundings. Abusing the wishing power of Twinkers, the three begin to ask for more and more selfish things, which begins the reduce both the Caring Meter and the very color of Care-a-Lot itself. Too Loud himself uses this power to wish for more and more extravagant things like a big motorcycle.

Eventually, their rampant wishing threatens to pull Care-a-Lot apart. After realizing the harm they've caused, the three outsiders pledge to help rebuild the Care Bear's home to its former glory with their own hands. Later, when everything is back to normal, the other bears agree to let them stay in Care-a-Lot for good. 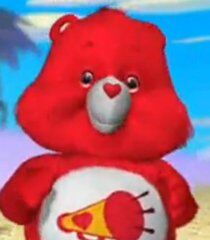 Retrieved from "https://hero.fandom.com/wiki/Too_Loud_Bear?oldid=1826620"
Community content is available under CC-BY-SA unless otherwise noted.