Tooru "Tor" Kokonoe is the main male protagonist of the light novel and anime series Absolute Duo. He is a first-year student at Kouryu Academy and the Duo partner of Julie Sigtuna. He is also an Avenger, an Exceed with a scar on his back, who entered Kohryu Academy in order to become strong enough to kill the man who murdered his younger sister, who died protecting him.

He is voiced by Yoshitsugu Matsuoka in the Japanese version of the anime and Ricco Fajardo in the English version.

Tor is a handsome young man and well built. He also is said to be a bit taller than the average teen male. He has shortish brown hair and brown-golden eyes. He is usually seen wearing his school uniform, which consists of a white dress shirt with a blue tie, black jacket and a pair of blue pants. When he is in the dorms with Julie he wears a white shirt and a pair of shorts, occasionally he tends to wear a green and white hoodie and jogging pants. Like every Blaze user, Tor has the Astar mark located on his chest.

Tor has a very protective personality. He cares a great deal for the people around them and will go to great lengths to defend them from harm, which is reflected by his Blaze manifesting as a shield. He is a very kind and patient young man who is polite to people in general, even those he doesn't particularly like, such as Lilith when they first met. Although he was initially awkward with having Julie as a partner and roommate, he ultimately agreed to become her partner after she was turned down by Tomoe, though he is still put off by some of her behaviour, like her insistence on sleeping in the same bed as him. Tor also has a habit of giving Julie an affectionate gesture to the head, something she adores. Julie states that he reminds her of her late father.

However, Tor also has a very vengeful side; ever since he watched his beloved younger sister get killed in front of him, Tor has made it his goal to become stronger in order to defeat and kill Narukami Sakaki, the one responsible for her death. He doesn't just want Sakaki dead, he wants to be the one to personally send him to his grave. In volume 6, when he meets Sakuya after coming out of the hospital, he's relieved when she says she doesn't care about who beat Tor, not because he's worried that Sakaki will retaliate against Sakuya going after him, but because he's afraid Sakuya will succeed in killing him herself.

Tor's favourite food is meat, to the point that upon first seeing his breakfast, Tomoe describes it as the "Carnivore Deluxe". He also dislike vegetables, but is often forced to eat them by Tomoe and Miyabi, who consider his diet to be very unbalanced. Tor also dislikes fighting women, to the point that he attempted to stop the fight between himself and Imari and only fought her reluctantly, even apologising before striking her. During official matches, however, he will fight his opponent no matter what gender they are, as shown in his fights with Lilith and Tsukimi.

However, beneath his cheerful exterior, Tor is in reality deeply insecure; although he seems aware that several of his female friends have feelings for him, he often believes he isn't good enough for any of them because he can't protect them, which stems from grief over not being able to prevent his sister's death, coupled with the fact that she died saving him. When Miyabi confesses her feelings to him, Tor has a traumatic vision of Sakaki killing Miyabi just to spite him (which he likely would, given his personality) and ultimately ends up rejecting her. Tragically, this hurts Miyabi to the point that she ends up turning to Equipment Smith in order to become stronger herself.

Tooru's Blaze manifests into a shield. He is said to always protect other people with his power and he himself admits this. It also seems to be impossible to break, very much akin to his will, or it is much harder to break than most Blaze due to its nature.

After Tooru reached Level IV. He gained the ability to manifest Aegis Desire, a blue energy barrier capable of shielding himself and allies at a large radius. He can create a barrier up to three layers though it depletes his mental strength quicker.

Ever since Tooru received his  ≪Astar≫ mark , he has strengthened a powerful punch attack which Tooru learned from his days at the dojo. When Tooru and Julie were talking about his "special attack" Julie decided to dub it "Mjolnir", after the destructive hammer wielded by the Norse god Thor. Mjolnir focuses a large amount of energy and force, allowing it to extend about a foot past where the punch was thrown. Tooru has also been shown using Mjonir's force to shatter floors and demolish entire buildings. However, using Mjolnir comes with a price. Tooru has stated in the beginning of the series that he cannot use Mjolnir more than twice a day, and that most women who are not well built cannot use this move, because the toll on the user's body due to the force applied is too strong. Tooru can however use Mjolnir more and more as the series progresses, as he gets stronger. Mjolnir is also the same move that Julie wanted to learn from Tooru, but was told that her body would not be able to withstand using it.

It is a new move Tooru made from the experience he gained, during the final battle he had with Lilith. It was similar to a flicker jabs in boxing and the fist prepared at a low angle thrust straight at the opponent in an instant. Taking "Mjolnir", the move of releasing all the charged power in one punch as the base, He arranged it to a move stressed in rapid fire. Since the motion was close to none while the power was reduced, it looks as if he was performing quick shots. Julie named it Hrungnir named after a jötunn(frost giant) in Norse mythology, who was slain by the god Thor with his hammer Mjölnir. 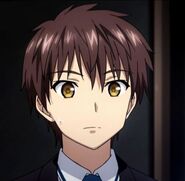 Julie staring at Tor
Add a photo to this gallery
Retrieved from "https://hero.fandom.com/wiki/Tooru_Kokonoe?oldid=1857075"
Community content is available under CC-BY-SA unless otherwise noted.