Autobot Scout
Member of the Wreckers

Scout
Topspin is one of the supporting characters from Transformers: Dark of the Moon and a minor protagonist of Transformers: The Last Knight. He is one of the Autobot Wrecker trio. All three Wreckers transform into NASCAR Sprint Cup Series Chevrolet Impala stock cars; Topspin's alternate mode uses the #48 Lowe's/Kobalt Chevrolet Impala of Hendrick Motorsports (driven by Jimmie Johnson).

Topspin likes hard jobs that leave him dented. He is very tough, but has below-average intelligence. Unlike his partners, Topspin has no speaking lines in Dark of the Moon though he does have some in The Last Knight. His weapons are two mechanical claws and two guns on his shoulders.

Topspin, Leadfoot and Roadbuster are a team of Autobot engineers called the Wreckers, who came to Earth in their ship the Xantium which carried other Autobots, including Sideswipe. NASA took possession of their ship and Director Mearing mentioned they were rarely let off base due to their behavior. When Sentinel expelled the Autobots, the Wreckers prepared the Xantium for launch, but Starscream destroyed their ship as it was leaving. In the battle in Chicago, Topspin and the other Wreckers killed the pilot of a Decepticons fighter, and revealed to Sam that they had hid in a booster rocket which detached before Starscream attacked. When Shockwave attacked their convoy and Optimus lost his trailer, they created a diversion so that Optimus could retrieve it. Later they helped Optimus untangle himself and were among the surviving Autobots at the end of the film.

Years later, Topspin, who now grew a beard, was among several Autobots that were given asylum in Cuba, where he constantly pestered Seymour Simmons to play volleyball with him. At one point, he had been pestering Simmons during an important phone call with someone, which annoyed Simmons to say the least. Still, once the call was over, Simmons went to the beach with him. 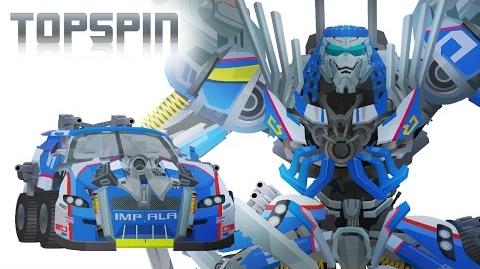