Be a good mother (succeeded for a while).
Kill Brightburn to stop him from killing and save the world (failed).

She was portrayed by Elizabeth Banks, who also played Betty Brant in the Sam Raimi Spider-Man trilogy, Wyldstyle in The LEGO Movie franchise, and Sal in Modern Family and Starla Grant in Slither.

In Brightburn, Kansas, Tori and her husband Kyle had attempted to have a child for a few years to no avail. One day, a meteor crashes to their farmland and they discover that it is actually a spaceship carrying an infant inside of it. Taking pity for the baby, the couple decide to take it in and raise him for a few years, naming him Brandon. While the first few years prove to be great for the parents, when Brandon began to mature, they began noticing a string of complicated behavior.

After Brandon breaks the hand of his love interest Caitlyn and is suspended from school for two days, Kyle begins to realize what type of horrors his adopted son was getting into, but Tori tries to deny the issues with their son and attributes his behavior to outside forces. Unfortunately, her beliefs are tested when she learns that her brother-in-law, Noah, had just been found dead in an apparent car accident that rendered his lower jaw destroyed.

After an argument with her husband ends with Kyle offending her about how Brandon wasn't their son, she learns that Brandon was not only responsible for Noah's death, but also a few gruesome murders as well such as with the mysterious disappearance of Caitlyn's mother. Unbeknownst to her, Kyle had already been brutally murdered by Brandon and not too long afterward, Brandon disposes of the sheriff and the backup police officer before going to confront his mother.

Remembering how he had earlier bled when he was scraped by a piece of metal from his spaceship, Tori grabs a shiv from the ship and whistles for her son. Brandon arrives and informs his mother that he truly did want to do good. Tori embraces him telling him that despite everything that had transpired, she still believed that there was good within him as she readied the shiv. Unfortunately, Brandon caught on to what she was intending to do, and he grabs her arm. With a look of hurt on his face, Brandon flies her up into the air. She nimbly caresses his cheeks one last time before Brandon lets her fall to her death. 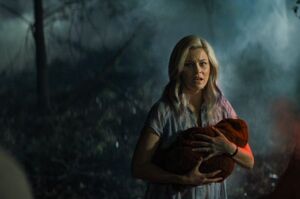 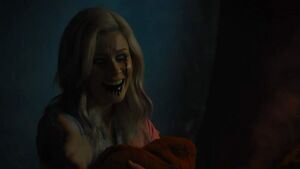 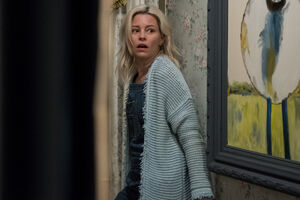 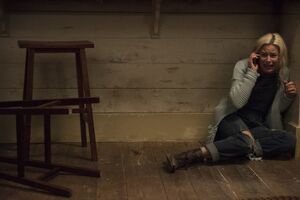 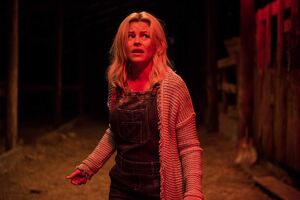 Tori in the barn. 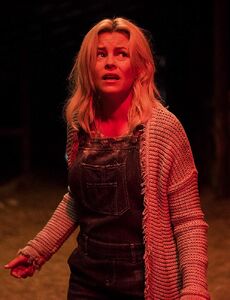 Tori falling to her death.