Being with Blake.
Training.

Defeat Lothor and other supervillains (succeeded).

Victoria "Tori" Hanson is the Blue Wind Ninja Ranger and one of the six main protagonists of Power Rangers: Ninja Storm. She is also Blake Bradley's love interest.

Tori's ninja training has endowed her with skills independent of her Ranger powers. Like her fellow ninja, Tori possesses superhuman speed and can move faster than the eye can see (referred to as "ninja streak"), leap higher than an average person, evade detection by normal persons, and focus her inner energies to resist mental attacks and manipulation. Her training based on her affinity for water allows her to move across water as if it were solid ground, create high-powered bursts of water as an offensive weapon, and manipulate and control water for a number of effects, such as creating objects.

As the Blue Ranger, Tori relies on the power of water to thwart evil, and pilots the Dolphin Zord.

In the finale, Tori becomes an instructor at the Wind Ninja Academy.

When Lothor returns in Power Rangers: Dino Thunder, Tori temporarily becomes evil alongside her teammates. They battle the Dino Rangers, but are set free by their comrades, Cam Watanabe, Blake Bradley and Hunter Bradley. The Ninja and Dino Rangers then team up to do battle with Lothor and Mesogog's combined forces, with her teaming up with Yellow Dino Ranger Kira Ford. Afterwards, the Wind Rangers lose their powers, leaving things to the next generation.

In Operation Overdrive, Thrax, son of Rita Repulsa and Lord Zedd, gathered all four factions determined to find the jewels of the Corona Aurora, Flurious and the Chillers, Moltor and the Lava Lizards, Miratrix and Kamdor, and the Fearcats, Mig and Benglo. Tori, Adam Park, Kira Ford, Bridge Carson and Xander Bly would be called upon by the Sentinel Knight to take the place of the Operation Overdrive Rangers when they lost their powers as Thrax's alliance damaged the Morphing Grid.

The team later went to a warehouse in Angel Grove where they discovered Alpha 6, who managed to repair the Morphing Grid and give the Overdrive Rangers their powers back. Both Ranger teams confronted Thrax's Alliance in a final battle, Tori fought alongside Rose Ortiz, the Pink Overdrive Ranger, against Moltor, who they defeated. The Sentinel Knight then appeared and used the Sword Excelsior to destroy Thrax, and the Rangers caused the other enemies to flee.

It is also revealed that Tori now runs her own surf shop. She is the only Ninja Storm Ranger to currently possess her Ranger Powers due to the Sentinel Knight; as she offers her phone number in case the Overdrive team ever needs help again, she presumably still has those powers after the end of "Once a Ranger".

Tori and the other Ninja Rangers returned as part of the army of Legendary Rangers that helped the Mega Rangers defeat the Armada once and for all, fighting in a huge battle against hundreds of X Borgs and dozens of Bruisers.

Tori is the logical and sensible member of the Ninja Rangers and a tomboy. She can be charmed by her teammates and loyal to her friends, but sticks up for Cam when her fellow Rangers pick on him and has an innate skill for ending conflicts with words instead of fists. Tori has an affinity for water, surfing in her spare time and mastering water based fighting techniques while training at the Wind Ninja Academy. She also has a crush on Blake Bradley, the Navy Thunder Ranger, which, while "obviously mutual", was never acted upon (most likely due to the show's targeting a younger audience). 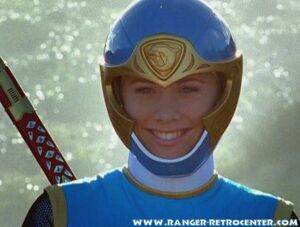 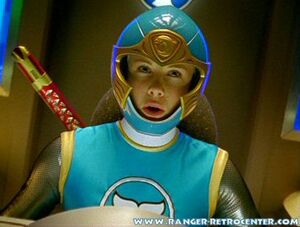 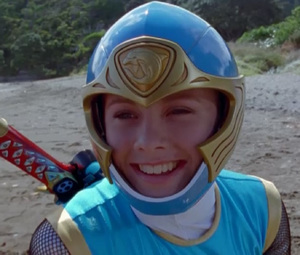 Tori smiling happily after Blake saved her from Mr. Ratwell. 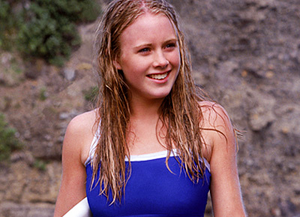 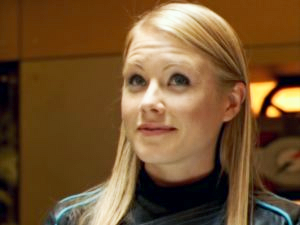 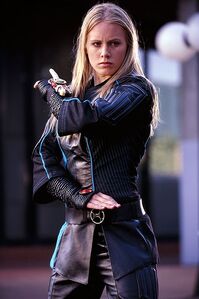 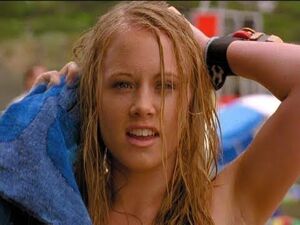