Spending time with her friends, Improving her talents

Victoria "Tori" Vega is the main protagonist of the hit Nickelodeon show Victorious. She experiences the biggest change of her life during the Big Showcase when she transfers from Sherwood High School to Hollywood Arts. This enables her to learn more about her "craft" (acting, singing, and dancing) and make new friends.  She is quickly learning how things work at Hollywood Arts.

She was portrayed by Victoria Justice.

Tori can be described as a moderately tall, slim, beautiful girl with dark brown hair and brown eyes. Her most prominent feature are her cheekbones which have been remarked upon by many (Mrs. Lee, Ryder Daniels, Rex Powers, Kenan Thompson, Freddie Benson, and Ke$ha) to the point of "Cheekbones" becoming a nickname of hers.

In the pilot, Tori's hair is different than it is the rest of the series. Instead of being curly and equally parted, it is straight and parted to one side. Tori is usually seen wearing t-shirts with a pair of jeans and boots. Her fashion sense is known to vary, suggesting she may be a downplayed fashionista or have a hidden gift for design. She was also able to style Beck's hair into a variety of hairstyles in Tori Takes Requests #8. She seems to enjoy wearing skinny jeans contrasted with looser tops but has infrequently inverted this or worn exclusively form hugging clothing. She also enjoys displaying her midriff suggesting a comfortableness with her sexuality and an acknowledgment of how attractive she is.

Tori is pleasant, positive, kind, short-tempered, easy-going, funny, sweet, intelligent, serious, forgiving, more mature and responsible than her sister, yet can be shown to be neurotic and impatient and sometimes stresses out at times, though such emotions are usually well warranted. Nevertheless, she is always there when her friends need her, such as in Rex Dies when she pretends that Rex came back to life to make Robbie happy and in Jade Dumps Beck, where she helps Jade and Beck get back together. Although sometimes it seems like they don't care (especially Jade), they really do love her and usually return the favor, such as when Beck did her stunt for her in Beck Falls for Tori and when they all help her to win a private concert from Ke$ha so she won't have to be Trina's assistant in Ice Cream for Ke$ha.

In the beginning of the series, she was insecure of herself, as shown in Pilot when she was good enough to get into Hollywood Arts on scholarship and yet still unsure of her acting ability in The Bird Scene, as indicated by her having to take the test three times. However, as time progresses she is shown to become more confident in her abilities though still retaining her sense of humility. Tori is shown to have an evil side. In Freak the Freak Out, she chases her sister Trina Vega and tries to hit her with her dad's new camera. In the same episode, Mr. Vega tells Trina that she has to get her wisdom teeth removed, and Tori cheers and makes fun of Trina. She gets her just desserts when she has to spend the weekend taking care of Trina, while her parents are on vacation in Santa Barbara (so they don't have to take care of Trina). Tori becomes furious and tries to pull out Trina's wisdom teeth out herself. Throughout the series, she is shown being hostile to Trina on multiple occasions. Many of Tori's more hostile moments suggest she is capable of being as callous as Jade but fears who she could become if she indulges those aspects.

Tori is characterized by her charm and is liked by everyone, but Jade West. Her charisma and sensitivity is undermined, however, by her quick thinking and giving into peer pressure. As as result, this can lead to Tori getting into trouble easily, and this is seen primarily in the first season. Such an example comes in the episode, Beck's Big Break, where Tori gets Beck fired from the movie production he was originally working with. In the end, Tori makes up for her mistake and Beck gets his role back. Her date with Ryder Daniels is an example of how easily she is given into peer pressure. After Trina eavesdropped on the conversation between Tori and Ryder, Tori eventually opted to find herself snooping through Ryder's phone, and she was eventually caught by Ryder. In the end, she finds out that Ryder was only dating Tori for the good grades. Some of her attitudes, suggest that Tori wants others to like and admire her as a flawless being who can solve everything.

Tori's soft heart also plays a major role in her reactions to the environment around her. While others are less forgiving, Tori has a sweet spot for people in trouble and her quick thinking emphasizes her caring and genuineness. An example of this comes in the episode, Survival of the Hottest, where she spots Sinjin face down in a kiddie pool. Her quick reactions help Sinjin to stay alive, rotating his body in a face up motion.

In contrast to her big sister, Tori is a much more mature person and tends to enjoy things in a neutral state of mind. This is stressed in the episode, Wi-Fi in the Sky, demonstrating the contrasting levels of maturity between the siblings. While Tori is portrayed as chill-headed. Trina is portrayed to be vicious and is shown to dislike being continuously annoyed, to the point of almost lashing out at the young boy behind her. This is later challenged and affirmed in the episode, Cat's New Boyfriend; challenged, due to her temporary behavior after glossing over Daniel and Cat Valentine kissing, but affirmed when Tori and Daniel both state that jealousy is not a normal feeling she associates with. As such, her vulnerability is underscored through her conflicts of emotion.

Several episodes imply that Tori is much smarter than she lets on as she is known to be able to quickly solve problems (The Great Ping Pong Scam, The Diddly-Bops, and Locked Up!), organize whole productions in days' time (Wok Star and Prom Wrecker), speaks multiple languages (The Wood, Locked Up!, and Tori Tortures Teacher), is able to learn and master dance routines merely by observational learning (Pilot and The Gorilla Club), and is suggested to simply be the intellectually smartest member of the group (possibly how she got through Brain Squeezers (game show) unharmed).

In addition to the above, some moments also imply that Tori, like her sister, is a good deal stronger than she looks. A good example exists in Freak the Freak Out where Tori was able to able to restrain the exceptionally strong Trina alone while André, Beck, and Robbie, and later Hayley and Tara, could not. Additionally, Jade's plan in Stage Fighting would not have worked had Tori not believed herself strong enough of giving someone a black eye in a single blow. She also appears very durable, being able to survive and quickly heal from Cat punching her in Cat's New Boyfriend, the injuries she sustained at The Gorilla Club, her phone, hooked up to car battery, electrocuting her (The Worst Couple), and being dragged across a field by a dog (Star Spangled Tori).

Despite, or perhaps because of, being a relative newcomer at Hollywood Arts, Tori seems the most dedicated to the performing arts frequently throwing herself into situations and opportunities that the other five react with, at best, polite indifference towards (The Wood, Beck Falls for Tori & Tori Goes Platinum) while also trying to improve her craft, contrasting the others' stagnation (The Gorilla Club). Discounting her initially losing the Platinum Music Awards, she appears to be the most determined of the lot, getting André a second chance in The Diddly-Bops after he was ready to abandon his dream, attempting very hard to cheer up Sikowitz when she thought she was the cause of his depression, and managing to survive the rough neighbourhood in Terror on Cupcake Street alone. Likewise, in The Slap Fight, she was the only one who recognized how petty everyone's behaviour was and that they were neglecting an important project. 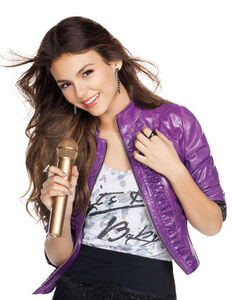 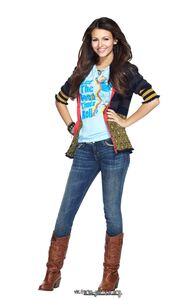 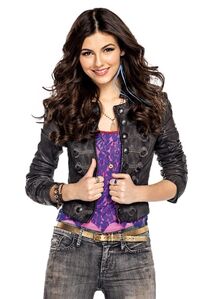 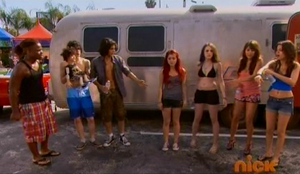