A Film of Eggs

Protect the farm and have fun with their friends

Protector of Innocence
Toto (Rolo in the English dub of the third film) is an anthropomorphic egg whose personality is shrewd and sympathetic, but seriously separated from his mother and imported into a store. He is the key protagonist who has a good relationship with Willy and Biba. In the third film, Toto is finally a rooster.

One of Toto's dislikes is once Serp starts to attack his friends. Serp is usually very despicable in confronting Toto. Toto also dislikes the cat, because the cat has a big appetite for eggs. He also dislikes why an evil egg sorcerer was commanding his scorpion armada to take over the world.

Toto as a baby chick. 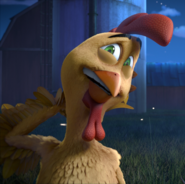 Toto as an adult rooster.
Add a photo to this gallery

Retrieved from "https://hero.fandom.com/wiki/Toto_(Film_of_Eggs)?oldid=1832375"
Community content is available under CC-BY-SA unless otherwise noted.