She decided to become adventurer after the disappearance of her mother to looks for her. She is also an alchemist and the apprentice of Rorona. In the beginning of Atelier Totori, she makes a lot of mistakes that cause many explosions but in the end she become a great alchemist. In Atelier Meruru, she has retired from adventuring, and now focuses on alchemy. She is also Meruru's teacher.

As she starts out as an aspiring alchemist and adventurer, Totori is a bit unsure of her skill, and relies heavily on her friends for support. However, in time, Totori becomes more confident in herself, and becomes a full-fledged adventurer on a mission to uncover the truth about her mother's disappearance.

Like her sister Ceci, Totori can be stubborn when it comes to her goals. Even though Ceci was strongly against Totori's goal of adventuring and traveling across the sea, Totori's desire came through and allowed her to gain Ceci's approval.

Despite her somewhat timid and quiet demeanor, Totori has a habit of accidentally saying the wrong thing at the wrong time, which she has worked on correcting in the time between Atelier Totori and Atelier Meruru.

Much like her teacher, Totori loves anything that is cute, especially the Chims.

The Adventurer of Arland

Before the beginning of the game, she will one day find Rorona who has collapsed in front of her house. After Totori's family takes care of her, upon seeing that Totori is interested in alchemy, Rorona will decide to be her teacher.

In the beginning of the game, she decide to become adventure with her childhood friend Gino. After getting her licence, she will have to fill conditions to keep her adventurer licence while searching for clues to find her mother, for which she will be assisted by her friends. After being reunited with Rorona, she will create a Chim for her to assists her in her alchemy and her battles.

Totori will later decide to build a boat to find her mother. For that she will have to synthetize the part of the boat for her father for him to build it.

If the player fails to bring the boat part before the ending of the game, it will trigger a bad ending.

If the player succeed to bring the boat parts. Totori's father will build the boat and Totori will leave Arland to find her mother. On her way she will have to fight the Flauschtraut(who is considered to be the cause of Gisela's boat destruction and so her disappearance). After having defeat it, she will reach the Frontier Village and learn that her mother have died in this Island after trying to fight the Evil Face.

The player's actions will determine the game's endings and events.

In the True Ending, Gisela is alive and has returned. Which makes Totori and her family happy.

The Apprentice of Arland

Totori has been summoned by Arls's kingdom as alchemist in place of Rorona. At that time, she stopped to be an adventurer and became a full time alchemist. She servers as Meruru's teacher and allows her to use her workshop. She is also a recruitable members for Meruru's party.

Futhermore, alongside Meruru and Astrid, she will help to find a way to turn back Rorona, who is now a 8 years old girl into her real age and will success in the True Ending.

The Scion of Arland

Totori is now employer for the Adventurer's Guild employed as a receptionist. She will asks Lulua to do tasks in order to renew her Alchemist Buiness Licence. When Lulua is about to be attacked by a dragon, she and Sterk save her by killing the dragon. After Lulua's return, Totori gives her the new renewed Licence.

She is recruitable in Lulua's party as DLC character. 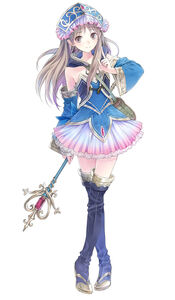