Claws
Painting (quite good for an animal)
Occasionally perceptive

Being a tough alley cat.
Having fun.

To get back home (succeeded).

Toulouse Aristocat is the middle child kitten of Duchess and an unknown male cat and the brother of Marie and Berlioz. He has hazel eyes, and long orange fur with a lighter orange stomach. He wears blue ribbon around his neck that is tied similarly to a bow tie. Being a kitten, he's fairly small, but also seems to be a bit fatter than his siblings. He was the first to suspect that Edgar the Butler had betrayed them, even though at the time his siblings and mother dismissed his claim. But Edgar's second attempt to send the cats away to Africa ultimately vindicates Toulouse's suspicion.

He was voiced by the late Gary Dubin.

Toulouse has hazel eyes and long orange fur, with a lighter orange stomach. He also wears a large blue ribbon around his neck that is tied similarly to a bow tie. Being a kitten, he's fairly small but also seems to be a bit bigger than his siblings. This is possibly because he is the oldest of the three.

Toulouse wishes to meet tough alley cats, and often tries to appear tough. He is known for puffing up and attempting to hiss when trying to show how tough he is. Toulouse is fairly laid-back and easygoing otherwise, being the most playful of the three kittens. He aspires to be a painter and practices his painting daily.

Toulouse is first seen alongside his siblings and mother, as they are returning from a carriage ride with their wealthy, loving owner, Madame Bonfamille. After the ride, Toulouse briefly gets into a fight with Marie and Berlioz about who can go through the cat door first, scoffing at his sister's protest that she is lady and should therefore get to go first. Duchess scolds them for fighting, and sends them on to their lessons. While Berlioz and Marie are having a music lesson, Toulouse works on a painting of Edgar, the butler. After finishing, he joins in the music lesson, with his paws still covered in paint.

Later, Toulouse has dinner, and unknowingly drinking milk laced with sleeping pills. That night, while the cats are sleeping, Edgar kidnaps them and drops them off in the French countryside. Toulouse briefly awakens during the ride, and thus is the only one of the cats to know what had happened. Duchess and the other kittens are in disbelief when he tries to explain, however, Edgar had indeed been involved. Edgar had actually tried to get rid of the cats so that he could inherit Madame's vast fortune, which the cats would have inherited otherwise.

The next morning, Toulouse and his family meet with Thomas O'Malley, an alley cat who offers to help them go back to Paris. Toulouse is impressed, as he had always wanted to meet an alley cat. O'Malley first get the cats on a milk truck bound for Paris, but the truck driver chases them off after he spots them drinking the milk. They decide to walk home, and Toulouse leads the kittens across a railway bridge, pretending to be a train. However they are forced to hide under the bridge when a real train comes.

After a long walk, Toulouse and the others end up in Paris. O'Malley leads them to an abandoned building where they can spend the night. During their time there, they meet Scat Cat and his gang of alley cats. The next morning, Toulouse is able to return home, but he and the kittens realize that the cat door has been locked. They start meowing, but are all captured by Edgar. Edgar locks them in an old oven, while he prepares to mail the cats to Timbuktu. Duchess sends their friend Roquefort the mouse to find O'Malley so he can help. Toulouse takes a moment to rub in that he was right about Edgar, much to Marie and Berlioz's annoyance. Thanks to O'Malley, as well as Scat Cat's gang, Toulouse is rescued, and Edgar is mailed to Timbuktu in their place. Toulouse is then seen with Duchess and his sibling, posing for a picture with O'Malley, who has been adopted by Madame. Later, he attends the opening of Madame's foundation for the alley cats of Paris. 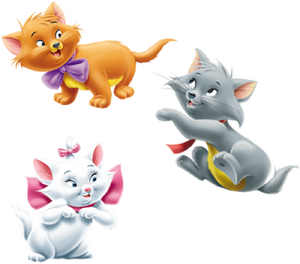 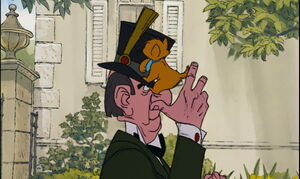 Toulouse painting in The Aristocats 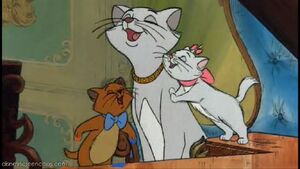 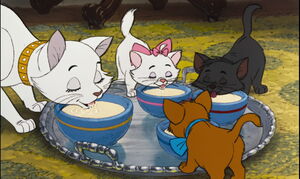 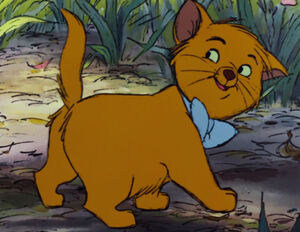 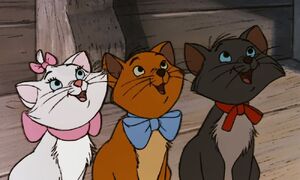 Toulouse with his brother, Berlioz. and his sister. Marie 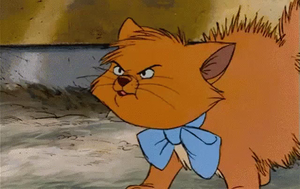 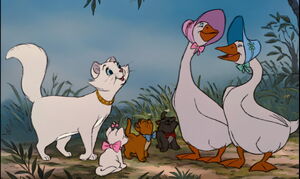 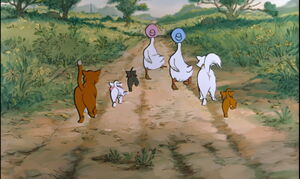 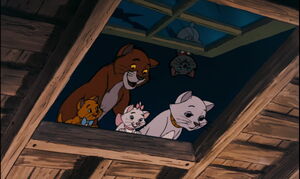 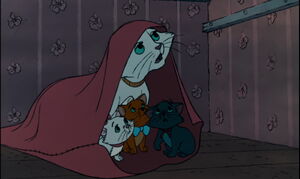