Writing manuscripts for his books.

Defend the world against the Megiddo.

He is portrayed by Syuichiro Naito.

As a child, Touma was present during an attack by the Megiddo where he was saved by the current Kamen Rider Saber. Later on, Touma would inherit that Saber's Wonder Ride Book and become next in line to become Saber.

When the city was attacked by the Golem Megiddo created by Regiel, Touma was mysteriously given the Seiken Swordriver and used the Brave Dragon Wonder Ride Book to become Kamen Rider Saber. As Saber, he fought and destroyed the Golem Megiddo, returning the city to normal.

He was observed by Rintaro Shindo, who later went to his bookstore and demanded he give back the Seiken Swordriver to the Sword of Logos. 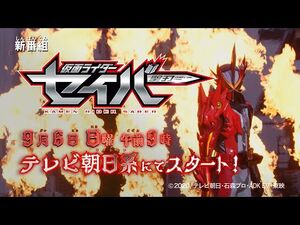 「仮面ライダーセイバー」変身シーン盛り沢山のスペシャルな映像を大公開！
Add a photo to this gallery

Retrieved from "https://hero.fandom.com/wiki/Touma_Kamiyama?oldid=2104875"
Community content is available under CC-BY-SA unless otherwise noted.