Towa is a supporting character in the Pokémon film Celebi: Voice of the Forest. She is the wise elderly guardian of the forest that Celebi guards.

Towa has lived in Arborville, at the entry of a forest. Shortly before young Sam Oak walked into the forest and, via Celebi, got sent into the future, Towa warned him that if he heard the "Voice of the Forest", he should not move, or else he would be spirited away to another time. She also gave him a loaf of bread as a parting gift, in case he got hungry while in the forest. She later saw a beam that Celebi created from a distance and wonders if it could be time traveling.

In the present time, Ash and his friends were about to enter the same forest, when a much-older Towa and her granddaughter Diana appeared. Again, Towa warned about heading into the forest, claiming it was dangerous. When Ash later returned with an unconscious Sammy to Towa and Diana's home, Towa recognized him as the boy she met when she was younger, citing him as a victim of Celebi's time travel. Sammy in turn remembered her as the young woman he had met only earlier that day.

Later Ash & Sammy save Celebi from the Marauder's twig monster, but unfortunately, it seems Celebi has died. Everyone weeps for the lost of their lost friends. Suddenly, many other Celebi from the past and future came to heal their friend. And Celebi revives, to everyone's delight.

Suddenly the Marauder reappears from the lake and grabs Celebi and attempts to fly away with Celebi on his jetpack. But Ash grabs on tightly onto the Marauder's leg as he rises higher and higher. Ash then ordered Pikachu to Thunderbolt the evil man's jetpack, causing it to explode, sending all three plummeting several meters towards the forest floor. While Celebi saves Ash and Pikachu, the Iron-Masked Marauder CONTINUES his long fall. Although he survived his fall, his mask was knocked off and his remaining Dark Balls were destroyed. Towa, Diana and Mr. White then confront the Marauder along with the forest Pokémon. Surrounded by the angry forest Pokémon, the Marauder tries to send his Pokémon out, but he doesn't have any. The now-powerless Marauder begs for mercy, claiming "This is all a mistake! A big misunderstanding!" The forest Pokémon then tie him up using String Shot, to which Towa replies "I think the Pokemon understand perfectly!"

Towa is last seen bidding Ash and the gang farewell. 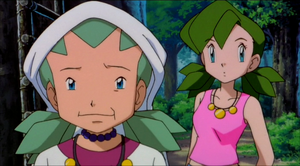 Towa with her granddaughter, Diana 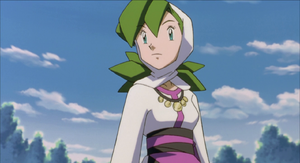 Towa, as a younger woman 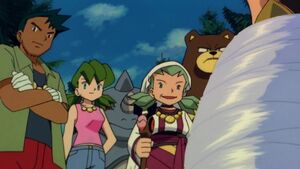 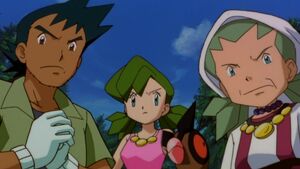 Towa speaks to the Iron-Masked Marauder