Tracy Flannigan is one of Brian Griffin's ex-girlfriends. She appeared in the Family Guy episode, "The Former Life of Brian". Unbeknownst to Brian, she gave birth to their son, Dylan sometime after the relationship ended. She became a fat slob with a gravelly voice after Brian left her. She left Dylan with the Griffins, leaving Brian to take care of him. When Brian first dated her, she tells him that her father sexually abused her and was afraid to tell anyone because she thought it was somehow her fault. She drops Dylan off at Brian's so the two can bond and she'd be relieved of the responsibility. She wishes to get her life back on track by getting into the University of Phoenix. When Brian and Dylan eventually do bond, Peter Griffin tricks her into thinking she would be going to view or be part of a taping of The Price is Right so she can pick up Dylan.

In "Valentine's Day in Quahog", Stewie gathers scores of Brian’s former girlfriends including Tracy to get to the bottom of why he’s unsuccessful in love. 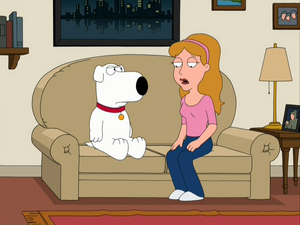 A young teenage Tracy with Brian
Add a photo to this gallery
Retrieved from "https://hero.fandom.com/wiki/Tracy_Flannigan?oldid=1935180"
Community content is available under CC-BY-SA unless otherwise noted.