Catch any good bounty possible and save the world from the Apostles of the Stars.

Train Heartnet is the main character in the anime and manga series of Black Cat, as well as a sweeper partnered with Sven Vollfied.

He is voiced by Jason Liebrecht, who also voiced Syaoran, Tsubasa Li in Tsubasa: Reservoir Chronicle, Syaoran Li in Cardcaptor Sakura: Clear Card, Finnian in Black Butler, Haruitsuki Abeno in The Morose Mononokean and Kunimitsu Tomoda in Fruits Basket As a child, he is voiced by Luci Christian in the English version. He is voiced by Takashi Kondo and Minami Takayama as a child in the Japanese version.

Train's outfits change rather often in the manga, and very little in the anime. Black Cat's appearance changes early on the series. In his time with Chronos, the Number XIII would be dignified by adversaries in a long, worn out black trench coat over a black dress shirt, and his black pants to denote his extremely suitable and fitting image. Overall, his appearance suited his dubbed nickname.

When he became a sweeper, he wears a blue half jacket, with 4 doughnut like looking objects on it (while in the anime Train says they're food rations, in the manga, the author said they are made of wood), over a white t-shirt. This is accompanied black, long pants with, two brown straps that belong to his holster, and plain, black shoes. Plus, his cat collar/bell.

Train's underground name is "Black Cat" because of the misfortune that lies in his wake. He always says to his target "I've come to deliver some bad luck" right before killing them and he always completes a mission with 100% accuracy, without remorse. This is a side that Creed, a comrade of lower ranking, admires. Train's demeanor is very cool, bordering nonchalant and almost detached until he met a young lady by the name of Saya, who was a bounty hunter who lived life as she wanted to. He then began to reveal a much warmer and more human side of himself, which Creed despised Saya for.

After giving up his life as an eraser working for Chronos, Train becomes a Sweeper (bounty hunter) and his personality changes drastically as he takes on a more lighthearted approach to life. There have been many scenes where Train is displayed as carefree and even somewhat foolish at times. He often gets into fights with Sven (these fights involve Train letting another bounty slip through, his bottomless appetite, being way too silly, etc.) Following Saya's way of life, he refuses to kill, and seems to take some enjoyment in annoying his enemies. He is not one to "look before he leaps" and his antics usually lead to accumulating debt that he and his partner Sven have collected from property damage. At times he is solemn, usually from regret that he was unable to help someone, and other times, carefree and exuberant. There are even times when Train will revert to his earlier personality when tempted.

Memories of his past as a child, in regards to the death of his biological mother and father recur within some brief flashbacks and serves as the catalyst for his seemingly indifferent exterior and seamless interior. The mysterious and skilled man who is later found to be Zagine Axelox, is the one that raised Train to be the skilled gunman he is today. It also becomes part of a reminiscently bitter past, the realization of the cause of his own father and mother's deaths more than enough to push the young boy to the edge. He had grown to respect this teacher; this mentor of his who taught Train how to use a gun in the first place, exposing him to the a world of vigorous training, and also responsible for the Black Cat's notorious love for milk. His mentor is the one who told him that the drink will make his bones stronger, and as a result, Train would be stronger.

In the manga, Zagine trained and took care of Train for four months after killing Train parents until Train finds him bleeding to death in an alley. Sometime within the same year, Train is found by a man named Carl Walken who had a management position in Chronos. He took care of Train for 3 to 4 years. Carl is most likely responsible for Train becoming a member of Chronos.

In the opening episode, he is seen on a mission assigned from Chronos. Train Heartnet is considered one of the more formidable Numbers throughout the anime. Train is tasked by Chronos to kill the genetically altered weapon, Eve. However, he fails to pull the trigger, and quickly retreats when her guards arrive. Later, he is assigned for the same duty, and though he receives the opportunity, he doesn't kill her. This is because of Saya, a woman he had met just a night before, who was able to open Train up and teach him that there was more to life than killing.

Train joins Sven and Eve on their sweepers missions, until he finds out Creed is not only still alive, but he has formed the Apostles of the Star. Sven and Rinslet are kidnapped by the Apostles, and Train faces Creed, but at the last minute decides to save his friends instead of taking revenge for Saya's death.

Sven, attempting to hide Creed's bounty for 3 billion dollars, knowing that it would only increase Train's desire to face Creed again, goes to meet the Sweeper's Alliance. When Train finally meets the group, he notices that their leader, Glin, is actually a Chronos number. The two have a short fight, ending with them going to Kraken Island to find the Apostles.

In the battle, Train faces Creed, who is seemingly immortal thanks to the nanomachines in his body. However, being that his imagine blade has now fused with his body and soul, Train thinks to destroy the sword so that he wouldn't have to kill Creed, knowing that that was not what Saya would have wanted, and that Creed is not worth him turning back into a killer. The plan works and Eve manages to extract the rest of his nanomachines making Creed mortal again despite his pleads not to be such again. Train also takes part in the anime-only arc that involves Eve and the syndicate after her, known only as the Zero Numbers.

Along the way, the two stumbled upon Eve, where she was still being trained to be an ultimate nanomachine monster. After saving her from the clutches of Torneo, she decided to go with them. She appears to love Sven over Train after she and Train become rivals. Their rivalry begins because Train competes with her so Eve can further accentuate her abilities, even though Train doesn't take the rivalry all that seriously. The events in the manga follow that of in the anime similarly, although the manga version of Train had learned that killing Creed will not bring Saya back, that revenge is pointless whereas his anime counterpart is fully set on killing Creed as payback for Saya's death. However, Railgun seems to only be featured in the manga.

Train has shown remarkable speed and agility when running, as well as being able to run through an entire crowd to get to his target without anyone even noticing. Train has also shown that he can wield his gun like a melee weapon for hitting people to avoid shooting them after becoming a Sweeper.

Marksmanship: Train wields Hades, an ornate 6 shot black revolver made out of Orichalcum with an XIII engraved into its side and a lanyard (which could be from Saya's gun). It weighs 2.5 kg. He is an extremely skilled marksman, able to accurately shoot down bullets from other guns, and make a number of bullets hit at exactly the same time as well as ricochet bullets off of multiple surfaces and effectively hit a target. He is also ambidextrous.

Black Claw (written in kanji as 黒爪 Kurotsume, lit Black Claw/Talon): A physical attack where Train slashes with his gun in three different spots at his target in one shot.

Black Cross (written in kanji as 黒十字 Kurojuuji, lit Black Cross): An evolved/alternate version of Black Claw, where Train instead slashes twice in the same spot for critical damage. The style in that he slashes resembles a cross in the form of an X.

Railgun (written in kanji as 電磁銃 Denjijuu, lit Electromagnetic Gun): When his body became infected with nanomachines he manages to manipulate them to create static electricity. The orichalcum in his gun Hades can act as a catalyst for the nanomachines.This allows him to focus the electricity into the barrel of Hades, turning it into a railgun. He is able to fire three of these daily, due to the energy consumption it takes to create the electricity. Train loses this ability after using it against Creed in their final battle.

Burst Railgun (written in kanji as 爆裂 電磁銃 Bakuretsu Denjijuu, lit Exploding Electromagnetic Gun): This is Train's strongest attack. Train is also able to use Sven's specially made bullets with the Railgun, as shown when he uses the Railgun to fire a Burst Bullet. He uses this to defeat Creed. However, the combination of the cells in Train's body as well as the raw strength of the bullet is able to destroy the orichalcum barrel of Hades. Due to Train's condition at the time of finishing Creed off with this technique, the energy put into the attack also deprives him of his nanomachines, thus, he loses the usage of his Railgun ability at the end of the manga series. 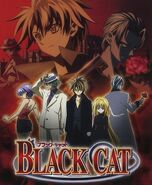