Trauare Wrede (RKS004 Vier), also known as Trau for short, is a heroine from Rosenkreuzstilette who is the heiress to the Chaos Spear Leviathan. She gets her nickname of "the Siren" from her personality alongside her unintentionally flirty mannerisms. She is voiced by Yuri Nashimoto.

Trau's appearance is that of a girl with light blue hair and a white seashell hair clip as well as blue eyes. She wears a blue competition swimsuit with lighter blue linings and wears a small white short-sleeved coat over it, and she wears a blue glove with a green gemstone that covers her wrist and middle finger, and carries a green spear called Leviathan that has a red cross painted on its blade.

In Rosenkreuzstilette Freudenstachel, she wears a blue dress resembling a Chinese dress over her swimsuit that has a light blue cross in between her dress' cleavage, and she gains blue socks and brown boots. She also gains a blue glove on her right hand that covers her entire hand and has an even bigger green gemstone.

She's also given her friend, Zorne Sepperin, a similar competition swimsuit, except that one is black with red linings.

Trau is composed and pragmatic and conceals her immature tendencies, making a point of whatever is asked of her but carrying a disinterested look in her eyes the entire time. She's an aloof person who generally avoids wasting effort whenever possible, looking down on those who refuse to do the same. While she's capable and has good control over her emotions, she's surprisingly difficult to control when she's angry, even more so than Zorne, and will stop at nothing to exact revenge on those who aggravate her. In fact, her temper is even worse than that of Zorne herself. Trau's personality, coupled with her unintentional flirty mannerisms, have both earned her the nickname of "the Siren." She has a passion for her favorite activity, swimming.

Zorne is Trau's closest friend in all of RKS, and despite having a worse temper than her, she serves as a calming influence on her. Trau will often invite Zorne to join her at a nearby ravine during their free time.

In Rosenkreuzstilette Grollschwert, Trau sees Grolla Seyfarth as something of a friendly rival. She is often curious and will fight with her to see who has the superior weapon, and she compliments her for being a competent fighter, even admitting that she's jealous.

Trau's ability, Klageharnisch, allows her to generate watery whirlpools and giant water pillars. Her other abilities are somewhat similar to Freudia Neuwahl's, but to a lesser extent. She can also levitate in the air and create duplicates of herself, and she can spend more time underwater than the average person.

When Spiritia Rosenberg encountered Trau in her quest to stop a coup from being launched by RKS against the Holy Empire, Trau laughed asking her if she took her for a pacifist, saying that she didn't like wasting effort, which she believed Tia to be doing. She believed that humans and Magi couldn't understand one another and believed it to be their fate, to which Tia disagreed. Lilli agreed with Tia saying that the two may not be the same species, but they were still friends. Trau called them fools saying nothing good would come of it, before fighting them. After defeat, Trau complimented Tia as she felt it had been a while since she had a warm-up as good as that one. While she knew the world was filled with despair, she decided it would be worth it to hang on just a little longer, and decided to side with Tia in helping to make RKS's dreams a reality. She also suggested that they should have a fair rematch after the entire incident was over.

Trau would become more serious if Zorne was defeated before her, feeling that there was too much sorrow in the world and believing that Tia couldn't change that no matter how hard she tried. Tia said that it was better than doing nothing even if she was right. Trau asked her if she had any idea how much trouble she was causing them, saying that Zorne couldn't sit still knowing she lost to her, and Tia replied saying that she couldn't give up, knowing that giving it your all would help to change the world. Trau decided she had enough of Tia's words and attacked. After she lost, she asked Tia if she didn't know when to quit, to which Tia replied saying that she would rather regret what she did than what she didn't do. Trau gave a compliment saying that Zorne couldn't have taken her on and decided to try believing in her too, deciding to help Tia help make RKS's dreams a reality. She also suggested that they should have a fair rematch after the entire incident was over.

Trau later gave Tia her support in the battle against Iris, and they happily reunited after Tia returned home.

Trau welcomed Grolla saying that they were going to have a lot of fun. Grolla asked her if she wished to battle her, to which she complied, believing her to have turned her back on RKS and sided with the "disgusting humans" as she called them, which she thought was more than enough reason for them to fight. Grolla knew she did nothing of the sort and that leaving Iris be would make humanity and the Empire the least of their worries. Trau laughed saying that she didn't stand a chance for believing such a thing. She fought her in a battle to see whether the Chaos Spear Leviathan or the Demon Sword Grollschwert was the superior weapon. After battle, Trau complimented her for being competent and decided to believe her story for then, admitting that Zorne never liked Iris anyway, saying that maybe she was on to something.

Should Zorne be defeated before her, Trau would decide to take her battle with Grolla seriously. Believing her to have betrayed RKS to side with the "disgusting humans" as she called them, she never figured Grolla would do something so pointless. Grolla knew she did nothing of the sort and that leaving Iris be would make humanity and the Empire the least of their worries. Trau didn't intend to debate that with her, and attacked her, and a battle to see whether the Chaos Spear Leviathan or the Demon Sword Grollschwert was the superior weapon was fought from there. After Trau was defeated, she complimented her for being competent and said that Zorne couldn't have beaten her with that kind of power, admitting that she was jealous. Trau decided to believe her story for then, admitting that Zorne never liked Iris anyway, saying that maybe she was on to something.

Trau greeted Freudia Neuwahl on her way to the Schwarzkreuz's church. Learning that Trau intended to drown the army of the church as a whole, Freu bidded her to stop, but Trau, becoming belligerent, attacked her, seeing no reason to listen to anyone other than Sichte Meister. Freu managed to cool Trau down.

If Zorne was defeated before Trau, she would be in deep anger towards Freu. She revealed that in the few months since Graf Michael Sepperin's death, Zorne had been a walking puppet, attempting suicide multiple times, all of which she herself stopped. However, she was awakened again by her anger towards the church army that was encroaching on the Graf's holy grounds. Trau accused Freu of throwing her friend back into the pit of despair and attacked her only to be defeated by her. Zorne showed up telling her that she was alright and that she would destroy anything that hurt her. She surprisingly told her that she herself was OK, causing a surprised Trau (for a moment) to smile and conclude that it looked like she was the only one heating up at the moment like an idiot. Trau then bidded good luck to Freu in bringing Tia back before leaving with Zorne. The two, along with the rest of RKS, later happily reunited with Tia, Freu, Lilli, and Strudel. 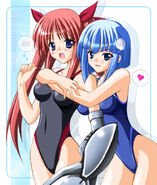 Retrieved from "https://hero.fandom.com/wiki/Trauare_Wrede?oldid=1595703"
Community content is available under CC-BY-SA unless otherwise noted.