Watching movies.
Training with hand guns.
Looking at himself in the mirror.

Sport and his gang

Travis Bickle is the protagonist of the 1976 crime/vigilante movie Taxi Driver.

He was portrayed by Robert De Niro, who also played Benjamin Ford in Killing Season.

After an honorable discharge from the Vietnam War, Travis picks up a job as a Taxi Driver. Travis suffers from insomnia and depression as a result of the traumatic events of the war and hopes to carry on a new life. He works the night shift and works long hours. He comes a long a woman named Betsy who is working for a headquarters in favor of electing a new president. Bickle becomes obsessive and stalks her. One day he walks in and attempts to speak with her. He successfully manages to ask her out on a date. He later invites her to a movie. She hesitates but agrees. Little did she know the movie Travis brought her to was a porn film. She quickly walks out and leaves Travis. Travis calls her but with no luck.

He then comes across a young prostitute named Iris whom he begins to obsess over. Like he does with Betsy, he stalks her too, but he does not attempt to speak with her the first time. A few days later he crosses paths with her again claiming that he is looking for some action. He speaks to her pimp who mistakes him for a cop. He speaks to Iris determined to get her away from a life of prostitution. He shows disgust for prostitution and crime. She tells him that she can leave anytime she wants but appreciates his help. Travis invites her to breakfast the next morning and gets her to agree to leave. Travis leaves her a note with money in it.

He then attempts to assassinate presidential candidate Palantine, the candidate Betsy had supported. He shaves his head into a Mohawk and attempts to kill him. Although his attempts are quickly foiled by Palantine's security guards. Unsuccessful in killing Palantine, a paranoid Travis goes over to where Iris is staying and shoots the pimps there. The police find a wounded Travis who has collapsed on the couch covered in blood. Travis points two bloody fingers to his head and makes a shooting gesture before he goes into a coma. He wakes up several weeks later to find that he had been hailed by Manhattan as a hero. 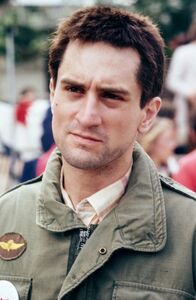 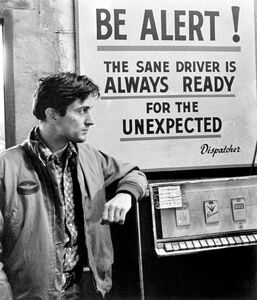