Enjoying being a trucker.

He was voiced by Mikey O' Conner.

Travis was born to a married couple named Richard and Helen Grady. During Travis's early childhood, his mother started suffering from severe psychological delusions, claiming beings from a mirror world told her that her son was a "devil child", ending in her attempt to try to gas herself and Travis.

Police broke into the house and both were moved to the hospital, and Richard later transferred Helen to the Cedar Grove Sanitarium, which is an important location in game. While she was there, Travis, missing his mother, snuck into the sanitarium, most likely to give her the "Daddy, Momma & Travis" drawing found there later. However, Travis was found and was brought home by his father. The two of them later checked into Riverside Motel, and Richard, on the advice of a doctor, told his son that his mother had died, but kept writing letters to her. Richard, while at the motel, moved deeper into a state of depression and finally hung himself in Room 500. Travis, having been out playing at the motel's arcade during his father's suicide, locked himself in the room with his father's corpse and stood there talking to it until the cleaners found them the next morning.

What happened to Travis in his childhood after this incident remains unknown, but the events most likely would have taken a heavy toll on his sanity and mental health and may allude to his questionable past.

About 15 years later, Travis is a truck driver haunted by nightmares of his past. On a routine drive to Brahms one day, he decides to take a shortcut through the town of Silent Hill. Driving on an unusually foggy road, he immediately stops his truck to prevent hitting an unknown cloaked pedestrian. Upon exiting the truck, he notices the figure is gone.

Trying to find the person, he wanders down the foggy road on foot, eventually coming to a burning house. He briefly sees Dahlia Gillespie skulking in the shadows, but she backs away. Hearing a scream inside the house, Travis becomes concerned and heroically searches the house. He soon discovers the charred and badly burnt body of Alessa Gillespie. He carries her body out of the house, and shortly after, passes out in the front yard to the sounds of sirens. Travis wakes up on a bench in Silent Hill itself, and leaves to make his way to Alchemilla Hospital to inquire about Alessa's health and see if she survived the fire. Shortly after entering, he meets Michael Kaufmann, but is simply told Alessa isn't at the hospital. However, Travis takes an elevator to the second floor and encounters an unharmed Alessa behind a large mirror, which she "teaches" him how to use; by touching the mirror with his hands, he himself can shift the town into its foggy and hellish counterparts. Travis finds a piece of the Flauros and meets a nurse, Lisa Garland, who tells him that she plans to meet Kaufmann at Cedar Grove Sanitarium. He travels through the town, including Cedar Grove Sanitarium, Artaud Theater and Riverside Motel, discovering that his father killed himself and that his mother went insane and was placed in the Sanitarium. All the while, Travis is stalked by the Butcher, and entity that represents his inner demons. Travis defeats the evil incarnations of his deceased parents, and defeats the Butcher as well, finally gaining solace from his past.

Due to his troubled past, Alessa targets Travis as her unwilling aid in fulfilling her desire to prevent the birth of God. Travis unknowingly helps her by traveling throughout the town and collecting the Past, Present, Future, Falsehood, and Truth pieces of the Flauros, which has the power to expel Alessa's Dream at the climax of the story. Although Travis wants to leave the town as quickly as possible, he later realizes the importance of his role and stays to finish the job of his own free will. Depending on the ending the player receives, Travis has a different fate, though only the Good Ending is canon.

Having only a brief cameo in Silent Hill: Homecoming, Travis gives Alex Shepherd a lift home to Shepherd's Glen. Travis left Silent Hill in the normal world, but was once again in the Fog World as he drove Alex to his hometown, although it's possible that he, just like Laura in Silent Hill 2, only saw the Real World, not the Fog World. The reasons for this are unknown.

Also, despite being decades older, Travis still has the same style in clothing, as he sports a vest and flannel shirt. He also sports a full beard.

He seems to have some friendship with Alex, who he believes is a soldier. This may symbolize, along with him still being a trucker, that Travis has not moved on from his past and that he is still tormented. However, seeing as how he does not seem to recognize Shepherd's Glen being in the Fog World, it could very well mean that he has moved on with his life, and may just enjoy being a trucker.

Travis makes a brief cameo at the end of Silent Hill: Revelation. After Heather Mason and Vincent Cooper leave Silent Hill, they hitch a ride with a truck driver, who mentions their luck as he "hasn't been out this way in a long time" and states his name is Travis Grady. He asks the two where they are heading, to which Heather answers: "Just take us as far away from here as you can". He is played by actor Peter Outerbridge. 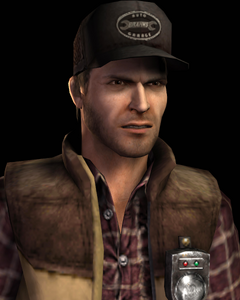 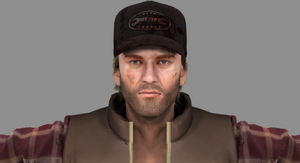 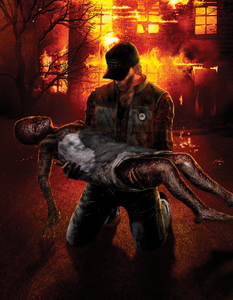 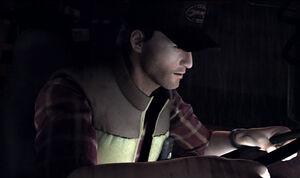 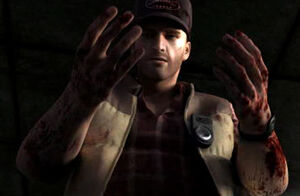 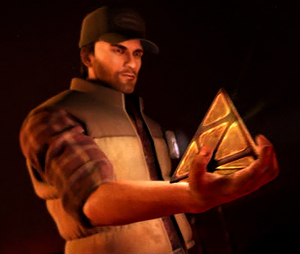 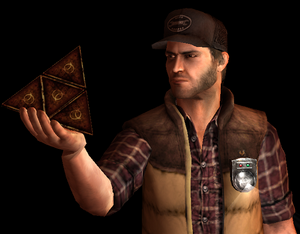 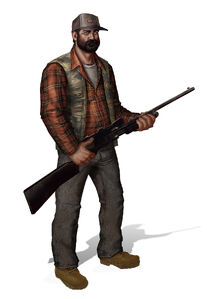 The "Hunter" design which was scrapped and reused for Travis. Art by Kenzie LaMar. 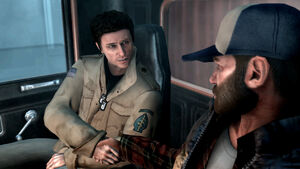 Alex thanking Travis for the ride. 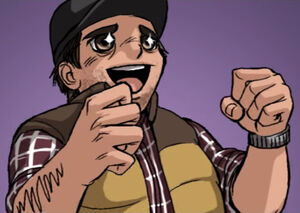 Travis in the UFO Ending. 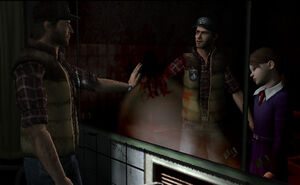 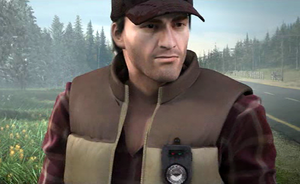 Travis leaving Silent Hill.
Add a photo to this gallery

Retrieved from "https://hero.fandom.com/wiki/Travis_Grady?oldid=1787424"
Community content is available under CC-BY-SA unless otherwise noted.