Kill Jasper Batt Jr. and avenge his friend Bishop.
Get into a relationship with Sylvia Christel.
Take down Fu and Damon Riccitiello. (all succeeded)

Anti-Heroic Assassin
Travis Touchdown, (aka The Crownless King), is the main protagonist in the No More Heroes series.

He is a 27-year-old American assassin and stereotypical otaku – his motel room decorated with professional wrestling and anime collectibles – living in near, but comfortable and habitable, poverty in the motel "NO MORE HEROES" of Santa Destroy, California accompanied by his kitten Jeane (most likely named after his lost love). He appears to have interest in lucha libre and Japanese pro wrestling icons (like Thunder Ryu), as well as a moe driven anime series called Pure White Lover Bizarre Jelly; his apartment is filled with such mentioned merchandise.

After winning a beam katana in an online auction, he is hired by a woman called Sylvia to be a hitman. When he runs out of money to buy video games he accepts a job to kill Helter-Skelter, also known as "the Drifter," which earns him rank eleven by the United Assassins Association, a governing body of assassins. Realizing that he has now made himself a target for aspiring assassins, he sets out to secure himself as number one in the UAA, also making a deal with Sylvia that if he becomes number one, they will "do it". He gets around on his motorcycle, dubbed the "Schpeltiger."

He is voiced by Robin Atkin Downes, who also voices Kazuhira Miller.

Travis usually wears a light weight leather jacket, t-shirt, jeans and sunglasses, though his outfit varies more in No More Heroes 2: Desperate Struggle. Travis has dark spiky hair, and blue eyes. His apperance is said to be based on Jackass's Johnny Knoxville. The game's creator would even often show the game's staff a clip from Jackass: The Movie where Knoxville gets his nipple bit from a baby alligator to show the staff what kind of character Touchdown is.

Though it is heavily implied in the cliffhanging clash of the real ending of No More Heroes that Henry and Travis honorably kill each other, it is revealed that both Henry and Travis seem to be dissatisfied with the fight since Sylvia had interrupted it before one could kill the other.

Touchdown returns in No More Heroes 2: Desperate Struggle, set three years after Touchdown becomes the top assassin in the UAA. Desperate Struggle finds Touchdown withdrawn from the ranks of the UAA, rejoining as the 51st in rank after killing Skelter-Helter. While initially motivated by Christel with the promise of sex (again), after finding out that his best friend, Bishop Shidux, has been killed by hitmen hired by the 1st rank assassin Jasper Batt, Jr., he seeks revenge and rises up the ranks to kill Batt.

After the events of No More Heroes, he and Sylvia have truly gotten together, and planned to go back to Santa Destroy. Whether or not he stopped his profession as an assassin is unknown.

Travis Touchdown first appeared as a DLC Mii costume for the Mii Swordfighter in Super Smash Bros. Ultimate. He latter was added as a spirit in the "No More Heroes 3" event, he is a advanced primary attack spirit. His spirit battle is on the battlefield form of the Big Blue stage against a Mii Swordfighter with Captain Falcon's helmet and black SSB T-shirt (Travis' costume if the costume got purchased), Sheik and Princess Peach who favors neutral specials. At 99, the spirit can be enhanced into Full Armor Travis that turn the fighter into metal. 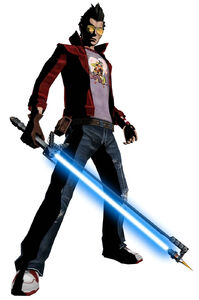 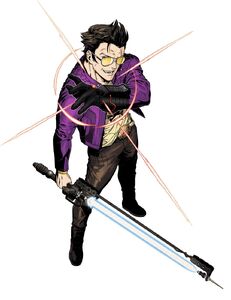