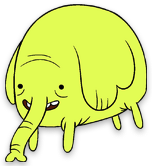 Tree Trunks has the personality of a gentle, older Southern woman, complete with a Texan accent. Throughout her titular episode, she constantly puts herself in dangerous situations—much to Finn's annoyance—due to her naivete. She often tries to use her cuteness to complete tasks by wearing a lot of makeup and attempting to seduce her subjects. Tree Trunks loves to bake, as seen in "Slumber Party Panic," where she's seen carrying hot buns and often shown to make pies in her free time. She seems to be a perfectionist when it comes to her pies, going to a very dark place if anything goes wrong with one of them and then throwing the pie away. After she is released from her Crystal Gem power in "Crystals Have Power," Tree Trunks tells Finn that she likes him a lot which strikes as awkward with most viewers as Tree Trunks, based off her voice and personality, is an older character and Finn is barely a teenager. Tree Trunks also seems to have very strong, but rather misguided morals as in "Apple Thief," she would turn herself in for stealing her own apples and in "Dream of Love", where she and Mr. Pig would publicly share their affection with each other, and although they try, they hide it very poorly to the all those around them. Tree Trunks also doesn't want Mr. Pig to stay at her house because to her it would be inappropriate for an unmarried couple to stay in the same house. However, at the beginning of the episode, Tree Trunks does mention that Mr. Pig had been staying with her since the affairs in "Apple Thief" which if so would be hypocritical on her end and later on she marries Mr. Pig and adopts the reincarnated Lich, Sweet P, which is short for "Sweet Pig Trunks".

Retrieved from "https://hero.fandom.com/wiki/Tree_Trunks?oldid=2292048"
Community content is available under CC-BY-SA unless otherwise noted.