Tricerashot is every bit as brusque and prickly as his saurian appearance suggests, but beneath it all he's not such a bad 'bot. Mostly he just wants to be left alone; he's not fond of having to work with the other six Weaponizers and would much rather strike out on his own given the opportunity.

Tricerashot and his fellow Mini-Cons were captured by the Decepticons in their youth and experimented on. Given the ability to combine with their larger brethren, the Mini-Cons were stored in a laboratory in Darkmount until Starscream stumbled on them. They managed to escape Starscream and fell in with some scavengers so they could escape Cybertron, only to find their new hosts were heading for Earth. They set about trying to work out a way to abandon the scavengers and leave the planet.

Despite being worried about the Bots who were trying to capture the Mini-Cons, Tricerashot accompanied Thermidor on a mission to find an artifact. Entering a cave, they found the artifact, but also encountered Grimlock and Brother Gunter. Tricerashot attempted to reason with Grimlock first, to Thermidor's annoyance, and the rest of the Autobot's team arrived. During the ensuing battle, Tricerashot attempted to control Grimlock, only to be surprised when the Dinobot resisted. Thermidor and Tricerashot fled, pursued by the Autobots. After losing everyone but Bumblebee, they stopped by a ski lift, and to Tricerashot's alarm, Thermidor intended to endanger the humans on it in order to cause a distraction. He was about to stop the scavenger when Grimlock arrived and managed to defeat Thermidor. The pair were pulled back through a GroundBridge to the Scavengers' mothership.

The Mini-Cons accompanied the scavengers to an automated ship to find a relic, and Tricerashot linked with Thermidor in order to head to the ocean floor to search. After the scavengers managed to retrieve the Dark Star Saber, Tricerashot and his companions stole their sub-orbital craft. Detecting a power source capable of getting them off-planet, they invaded the scrapyard looking for it, only to be told it had already been destroyed. Their craft eventually ran out of fuel, but they ran into the Autobots again. Though Aerobolt recognized Optimus Prime, Tricerashot remained distrustful of the Autobots, and took the opportunity to split when the scavengers turned up. As a result, he escaped being captured by Starscream shortly after.

Feeling the fear of his companions as they were captured, Tricerashot returned to the Autobots and linked with Grimlock to help defeat the scavengers. He was able to use the psychic link with his fellows to lead the Autobots to Starscream's ship, however during the ensuing fight, he was grabbed by Starscream, allowing the Decepticon to merge with all seven Mini-Cons. The super-powered Starscream dueled with Optimus until he was able to be lured into range of Fixit's signal, which separated him from the Mini-Cons. Tricerashot and his fellow Mini-Cons left Earth on the sub-orbital craft, now modified by Fixit for space travel. 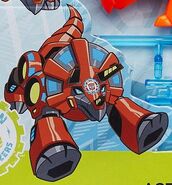 Retrieved from "https://hero.fandom.com/wiki/Tricerashot?oldid=2301120"
Community content is available under CC-BY-SA unless otherwise noted.