Become a famous actress and or singer (presumably)

Trina Vega is Tori Vega's older sister and serves as one of the main characters in the Nickelodeon TV series, Victorious. Trina is one year older than Tori, and is in the senior class at Hollywood Arts. She is a minor antagonist and anti-hero on the show.

Trina was portrayed by Daniella Monet.

Trina is portrayed as a stunningly beautiful young woman and is all to aware of that matter, Tina's arrogance, self-absorption, narcissism, vanity, selfishness and high self-importance makes her virtually unlikeable to any student in Hollywood Arts but this likely all stems to her believing herself an extremly talented actress and singer however she is actually tone deaf and her real singing voice is closely resembling to that of a person shrieking, in fact the main reason that Trina was enrolled into Hollywood Arts was because the teacher that let her in, Sikowitz, was having visions due to a coconut. She is very shallow and thinking herself a Paris Hilton wannabe.

Trina is also very materialistic, believing that is something wasn't bought or could be sold that it wasn't an actual gift and was left asking for her real Birthweek present when Tori only performed a song. She can also be somewhat bullying specifically towards "weirdoes" such as Sinjin or Berf and once or twice Robbie.

Despite calling herself one, Trina has little respect for her role as a performer which was shown in "The Diddlybops" where she was willing to dress as a hamburger and perform to little children simply so she could be seen. Trina wasn't above using aggression to get what she wants, along with cheating which was evident when she threatened to hurt Robbie if he didn't give her one-woman show a good rating and was capable to use to Sinjin to cheat to become the Prome Queen. 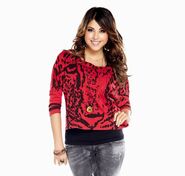 Add a photo to this gallery
Retrieved from "https://hero.fandom.com/wiki/Trina_Vega?oldid=1918703"
Community content is available under CC-BY-SA unless otherwise noted.