Morpheus' lieutenant and second-in-command of the Nebuchadnezzer

Being with Neo.
Piloting the Nebuchadnezzer.
Entering the Matrix.

The Twins
Cypher
Bane/Smith
The Machines
The Analyst

Trinity is the deuteragonist and the love interest of Neo in the 1999 film The Matrix and its three sequels.

She was portrayed by Carrie-Anne Moss, who also portrays Jeri Hogarth in Netflix's Jessica Jones.

Very little has been revealed about Trinity's original life as a bluepill in the Matrix, not even what her name was. Trinity was apparently a well-known computer hacker at one point, famous in underground circles for hacking the IRS database.

Morpheus explained to Neo that the rebels have a rule against freeing minds after they reach a certain age, because they have become so accustomed to the Matrix that the shock might kill them. The other generalized implication is that the rebels seek out young (i.e. teenaged) minds who possess a questioning nature, dissatisfied with the world around them because they subconsciously recognize that the Matrix isn't real.

Thus people that the rebels free from the Matrix tend to be teenaged computer-hackers, dissatisfied with the rigid constraints of reality within the Matrix. How well this applies to Trinity is unknown, but ultimately Morpheus himself is the one who freed her from the Matrix. Ghost was also freed from the Matrix on the same day (possibly by the same crew), and joked that this made him her brother of a sort.

Trinity first appears at the beginning of The Matrix, in a phone conversation with Cypher, which is heard off-screen. At dingy hotel room a chase ensues between Trinity and a group of police officers and Agents, a series of programs that police the Matrix against rebels.

Trinity is next seen communicating with Neo for Morpheus in several encounters. Eventually, she and the rest of the Nebuchadnezzar's crew unplug Neo from the Matrix and begin his training as a new recruit in the war against the machines. She participates in several missions into the Matrix, including taking Neo to the Oracle, a person inside the Matrix who is said by the rebels to have supernatural powers.

Throughout the film, it is apparent that Trinity has developed romantic feelings for Neo. Near the end of the film, after he is killed by Agent Smith in the Matrix, she speaks to his still plugged-in body and reveals that the Oracle told her that she would fall in love with the One, a prophesied individual capable of manipulating the Matrix to an unprecedented degree. She kisses him, whereupon he is revived. Neo defeats the Agents and the film ends. This marks the beginning of a romantic relationship between Neo and Trinity which proves decisive in the outcome of the series.

Trinity's importance as an individual character in the first sequel to The Matrix is fairly minimal for the first half of the film, though she appears in almost every scene.

She aids in the rescue of the Keymaker from the Merovingian and in the subsequent escape, but her real role in the plot does not come into play until the climax of the story, where Neo is forced to choose between saving Trinity and saving humanity, by joining with the Source and choosing 23 individuals to rebuild Zion after it is purged by the machines.

If he chooses to re-enter the Matrix in order to save Trinity, the Architect warns Neo that the destruction of Zion together with the system crash of the Matrix, and the death of all connected to it, would cause the end of humanity.

Where previous Ones chose to save humanity by accepting the Architect's deal, Neo's 'profound attachment to the human species' (instilled in him through the Prime Program) manifests in his relationship with Trinity as an individual, not in a feeling of responsibility for the entire human race, like the previous Ones. He thus chooses to save Trinity instead of continuing the cycle.

This is perhaps the result of the Oracle's actions, since the Path of the One normally leads to the One choosing to save humanity by making him believe he is the messiah and savior of humanity. But the Oracle has steered Trinity into falling in love with Neo (by telling her she would fall in love with the One before she met Neo), and thus has subtly changed the profound attachment that the One has for humanity into an attachment not only to humanity, but more so in one particular individual he loved deeply: Trinity.

Although Neo fails to save her from being shot after re-entering the Matrix, he is subsequently able to not only remove the bullet, but also in reviving Trinity after she dies of her injuries within the Matrix.

In the final installment of the Matrix series, Trinity is involved in the rescue of Neo from a cut-off segment of the Matrix, where he is being held by a program in the employ of the Merovingian. In the real world, Trinity goes with Neo to the Machine City in an attempt to negotiate with the Machines, serving as the pilot after Neo is blinded in a confrontation with Bane/Smith.

While attempting to evade Machine pursuers, their hovercraft crashes into the machine city. In the aftermath of the crash its is shown that Trinity has been impaled in the abdomen and arm by power cables, resulting in her dying after saying a final goodbye to Neo. After Trinity's death, Neo gives his life to defeat Smith and negotiate a truce with the Machines. 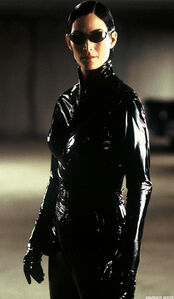 Trinity in The Matrix: Revolutions 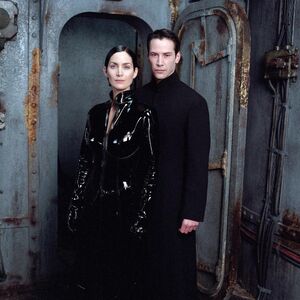 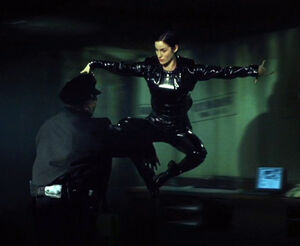 Neo and Trinity in the 1st Matrix film