Start a Wiki
Trinity Glassfille is a heroine from BlazBlue who is a member of the Six Heroes, and the true form of Platinum the Trinity who had her soul sealed within the Nox Nyctores, Muchorin.

During the Dark War, Trinity was known as the Platinum Alchemist, she was part of the Six Heroes. She studied at the Magic Guild alongside Celica and Nine. Due to a comment dropped by Hazama in "her" Arcade Ending, she was implied to be indirectly responsible for allowing him to kill Nine.

It is revealed in the Phase Shift 4 that when investigating Yuuki Terumi's plans, Trinity was manipulated into releasing Terumi from Nine's control using her lingering feelings to his body vessel, Kazuma Kuvaru. After she released control, Terumi was quick to betray Trinity by first killing Nine in front of her, and then killed her too before tossing both their bodies into the Boundary. However, Trinity's soul lived, and was sealed within Platinum's Nox Nyctores Muchourin.

Trinity has some very brief appearances in Chronophantasma; she can be seen when Platinum is targeted by Amane Nishiki's Astral Heat, and also in her special intro with Hazama. She is later killed by Hazama at the end of Chronphantasma as it is the last action Hazama makes, remarking how he will take her down with him.

Trinity is a young woman with light blonde, curly, medium-length hair, green eyes, and round glasses. She wears a Magic Guild uniform with a loose long light blue ribbon tie, a yellow coat with hood, black pantyhose, and black slippers. She has a sizable bust as well.

Trinity was a very kind and cheerful person, and a good friend of Nine. She was also quite close to Kazuma, the host vessel for Yūki Terumi, and was shown to be affectionate towards him. 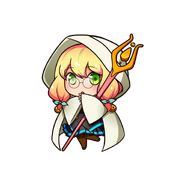 Retrieved from "https://hero.fandom.com/wiki/Trinity_Glassfield?oldid=1694772"
Community content is available under CC-BY-SA unless otherwise noted.